In the early fall, as you approach the edge of a woodland stream or the banks of a secluded pond, you may glimpse a flash of red. This spark of scarlet is from what may be the most brilliant of our native blossoms, the cardinal flower. John Burroughs, the 19th-century naturalist, wrote, "But when vivid color is wanted, what can surpass or equal our cardinal flower? There is a glow about this flower as if color emanated from it as from a live coal."

Burroughs was only one of many admirers. The cardinal flower won first place in Moldenke's poll of North American naturalists and botanists in the late 1940s listing the showiest and most interesting wild herbaceous plants. The late Roger Tory Peterson simply declared it to be "America's favorite" in his Field Guide to Wildflowers (1968). 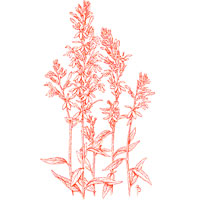 Lobelia cardinalis was first reported by explorers in Canada, who sent the plant back to France in the mid-1620s. The cardinal flower name was widely used in Europe by 1629, when the English botanist John Parkinson wrote that he had received a shipment of seeds from Paris for "the rich crimson cardinal flower...it groweth neere the river in Canada, where the French plantation in America is seated." The plant was a grand success in the gardens of Europe.

The royal red miters of the Roman Catholic cardinals appear to have inspired Linnaeus to adopt the species name cardinalis. He gave it the genus name of Lobelia in keeping with earlier work of Charles Plumier, a French monk and naturalist who named the plant genus after the Belgian botanist, Mathias de L'Obel (1538-1616), who sometimes used a "latinized" form of his name, Lobelius.

The cardinal flower's natural range is New Brunswick, Quebec, and Ontario southward to Florida and Texas and across the southern plains and mountain states to California. It is a member of the Campanulaceae or bellflower family. The plant produces unbranched slender spikes called racemes that are covered with scarlet flowers (technically called florets) from July to October in moist areas along streams, drainage ditches, wet meadows, swamps, and other low places. It grows from basal rosettes, or low-growing clumps, and has 4- to 6-inch lance-shaped leaves that alternate up the 2- to 5-foot-tall stems. The deep green leaves and rosettes often have a bronzy or reddish tint, especially on young growth.

The flowers themselves have a velvety texture and a tubular shape, with two lips. The upper lip is split into two long lobes, and the lower lip is deeply cleft into three parts. Bright blue anthers, the pollen-shedding male parts of the flower, are fused and encircle the style, or female organ, extending out far beyond the lips. A fringed "white beard" protrudes from the tip of the anthers. The flowers are especially adapted to pollination by hummingbirds. They are said to "pull hummingbirds from the sky." In fact, their blooming period corresponds especially well with the southern migration of Ruby-throated Hummingbirds to Mexico and Central America for the winter.

Discovery and cultivation of the alba form of L. cardinalis is credited to Howard S. Bradley of Hamilton, New York, who specialized in collecting white-flowered forms of colored flowers in nature. Hybrids of L. cardinalis with other species of Lobelia, primarily L. siphilitica and L. fulgens, have produced a variety of L. x speciosa cultivars with colorful names and red themes (of course!). Hybrids are not as winter hardy as the cardinalis species and so may have to be grown as annuals.

Cardinal flowers grow best in moist, rich, light, slightly acid soil, but can survive in other habitats as long as they are kept moist. They need some protection from midday or afternoon sun, and thus tend to do well at a wood's edge or at the base of a tree. Place them in a low spot in the yard or border to help keep them moist, and plant them with ferns, hostas, rudbeckias, and asters. Cardinals can also be grown in containers that are set in a tray of water on a patio or deck to bring the beauty of the flowers—and the hummingbirds—up close for enjoyment.

The basal leaves should not be covered in winter. In natural habitats, cardinal flowers are often restricted to open wet areas or edges where water or wind can keep the plants clear of smothering leaf litter through the fall and winter. If the plants are covered with heavy mulch, they will rot, especially in the South. If you regularly mulch your perennial beds to prevent heaving and root damage, use light straw or mulch that can be tucked under the leaves.

You can propagate the cardinal flower from seeds, divisions, and stem cuttings. Seeds usually ripen in the fall about seven weeks after forming. Harvest the brown seed capsules from the lower portions of the flowering stalk even when the flowers are still in bloom or bud farther up the stalk. Watch carefully for the capsules to begin cracking open at their tips; if you wait too long, the minute brown seeds will be scattered as the tall stalk blows in the wind. Each capsule contains numerous minute seeds, so one or two capsules should be plenty. Leave the rest to reseed the area; Lobelia are perennials but are often short-lived, so natural reseeding is important to keep the population healthy and abundant.

Clean, dry seed must be stored in a sealed container in the refrigerator for a couple of months before planting. (Seeds reportedly can be stored in the refrigerator for up to three years without much loss of germination.) After refrigeration, sow the seed very thinly in a seed flat, then very carefully cover the seed with a light dusting of fine soil. Water the flats from the bottom to avoid burying the seed too deep or washing the seeds into clumps. They will germinate in about a week in warm soil, but the seedlings grow slowly thereafter.

The mother plants often form numerous basal rosettes that can be divided in the fall or spring to make new plants. Replant the rosettes and water well for several weeks to encourage root formation, especially in the fall in order to get good growth before winter. Another effective means of propagation is to hold the lower portion of a tall stem down to the surface of the ground for several weeks in the summer so that roots and small rosettes of leaves can form at the lower nodes. Stem cuttings can be rooted in mid-summer.

Nathaniel Hawthorne penned a fitting tribute to the cardinal flower. He said, "The world is made brighter and sunnier by flowers of such a hue ... it arrays itself in this scarlet glory. It is a flower of thought and feeling, too; it seems to have its roots deep down in the hearts of those who gaze at it."

Dr. Cathy Donaldson started her first wildflower garden in the tenth grade. While studying for the state biology exam, she asked her teacher, "What is a Solomon's seal?" The next day her teacher brought in a bare-root Solomon's seal to show her that the basis for the plant name was its segmented root system that resembled a signet seal. Cathy was duly impressed, took it home and planted it in the yard, and was hooked on growing wildflowers. Now, Cathy fondly watches over more than 100 different species of wildflowers in the woodlands around her home near Knoxville, Tennessee, struggling all the while to discourage the deer from eating the tops off the yellow trilliums. She is editor and publisher of Trillium Trails, a bimonthly newsletter on wildflowers and native plants. For information, write Cathy at P.O. Box 23271, Knoxville, TN 37933-1271, or e-mail [email protected].

All About Bugs: Introduction to Butterflies ›

All About Bugs: Bees, Bee-Mimics, and Pollinators of All Kinds ›