Celebrate the Holidays at Lightscape - Tickets On Sale Now 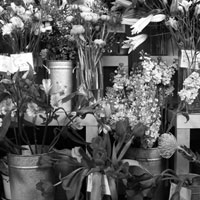 Over three quarters of the cut flowers sold in the U.S. are imported. (Photo courtesy of Amy Stewart.)

A few years ago, I got curious about where cut flowers come from. I had heard that over three quarters of the flowers we buy are imported, mostly from Colombia and Ecuador, but that figure seemed impossibly high. How could something as fragile as a flower travel thousands of miles by truck and by airplane, often in no water at all, before it ever got to the flower shop? Moreover, I wondered what this global trade might mean for local American flower farms and what conditions the workers on those remote Latin American farms faced. I consider myself a socially responsible consumer, and suddenly I just wasn't sure what I was buying into when I purchased cut flowers. I thought these issues would be worth exploring, so I traveled to Ecuador with a tape recorder, a camera, and a definite bias. I expected to be outraged by the working conditions on the farms I visited. I thought I'd return home with the conviction that I should only buy locally grown flowers. But that's not exactly what happened.

Most of the flower farms in Ecuador are located in the sunny valleys that surround Quito, only five or six hours from the capital's airport. This is how flower farms compete in a global marketplace: Land and labor costs are cheap in remote, rural communities along the equator, but a farm in Ecuador, Colombia, Kenya, or Singapore can only succeed if it's on a decent road that leads to an international airport so that the flowers can travel through an intricate system of airport cargo facilities, refrigerated trucks, global auctions, and regional warehouses to get to a first-world buyer like me. The flowers aren't sold at local markets—workers making under $200 per month don't tend to spend their wages on the luxury roses they produce.

I visited many flower farms, and along the way witnessed life in the Ecuadorian countryside. Most of the homes I saw were two-or three-room structures built of cinderblock or adobe and topped with tin roofs. There might be a few chickens scratching in the dirt or a goat tethered to a tree. Sometimes a snarl of cables brought electricity into the home, but not always: According to the most recent estimates, Americans consume 20 times more electricity than Ecuadorians. In the face of this standard of living, a job on a flower farm suddenly didn't look so bad.

Don't get me wrong—I'm not saying that every commercial farm is perfect. Environmental and labor problems on flower farms have been well documented. Studies have shown that sexual harassment, child labor, exposure to harmful chemicals, and unreasonably long work hours during peak holiday seasons are very real problems that demand reform. But even the most ardent labor activists I met in Ecuador said to me: Please don't tell Americans to stop buying our flowers. We need these jobs.

On the flower farms I visited I saw a wide range of practices. Some farms used environmentally friendly methods like composting and integrated pest management. On other farms, there were tanks of the fumigant methyl bromide, and I witnessed bunches of roses being dipped, blossom first, into barrels of fungicide. I also saw day care centers and employee locker rooms on-site, worker safety gear, and lunchrooms that provided hot meals to the employees. At the same time, some farm managers admitted that turnover was high and the wages and benefits barely met the minimum required by law.

I couldn't draw one easy conclusion from my visits to farms, but I did realize that in my effort to make responsible buying decisions, I had overlooked the needs of the people most affected by my decisions—the workers. One flower worker gave a speech recently in which she said this about her job: “For many people, myself included, who have no running water or a shower at home, it is extremely refreshing to take a shower after work.” Hearing this I realized that it would be easy for me, a person who lives in relative comfort and luxury, to decide to stop buying Latin American flowers because I thought the farms didn't meet my standards. But the workers I spoke to didn't want their jobs to disappear. They just wanted some guarantee of decent working conditions. Fair trade and other certification programs make that possible.

Hannah Freeman is the produce and floral account manager for TransFair USA, the nonprofit that certifies fair trade products for sale in the United States. For the past year, she's been working to introduce fair trade flowers to the American market. The program has already gained traction in Europe, where imported flowers from Africa are the norm. “African farms ship more than 150 million stems of fair trade flowers to Europe annually,” Freeman said. “This means that about $1.5 million in premium money is being invested in flower-growing communities because European consumers support and purchase fair trade flowers.”

The Fair Trade Certified program, which also certifies coffee, chocolate, tea, sugar, and other products, requires that farms adhere to strict environmental and labor standards. A portion of the purchase price goes directly to the workers to fund community-development programs, which work to improve local schools, access to electricity, health care, and the like.

Freeman travels regularly to Latin America and Africa to see the impact that fair trade programs can make. This year, she visited Elvia Almachi, a flower worker in Ecuador. “She showed me the baby pigs that had just been born from the adults she had acquired through a fair trade premium program,” Freeman said. “She also showed me how she had started construction on her house to expand it. Elvia has a smile that will stop a train, and she couldn't help grinning as she showed me the progress since my last visit.” Other workers have gone to school for secretarial training, set up computer centers, and given their children an education they wouldn't have otherwise. One worker told Freeman, “We only choose the best flowers to send to the fair trade market. We always hope there will be more fair trade purchases.”

Fair trade flowers made a limited appearance in U.S. grocery stores for the first time in 2007 but will be available on a larger scale starting in early 2008. Freeman hopes that shoppers will see the familiar Fair Trade Certified logo and show support for the program with their dollars. An ecolabel called VeriFlora was also launched in 2007, stickering certified sustainably grown flowers and potted plants. The VeriFlora program has been certifying the environmental and labor practices of flower farms around the world since 2003. “The standard requires strong worker training and safety programs,” said Linda Brown, executive vice president of Scientific Certification Systems, the California- and Mexico-based company that certifies VeriFlora farms. “Workers are guaranteed the right to organize, and there are overtime protections and other benefits that go above and beyond what the law requires.” Fair Trade Certified and VeriFlora aren't an either/or proposition; some bouquets may carry both labels.

But where does this leave local flower growers? Take roses as an example. Ninety-five percent of roses sold in the States are imported. According to the United States Department of Agriculture, there are only 45 large-scale rose growers left in the country, down from 157 a decade ago. And the small-scale growers who sell flowers at farmers' markets or to local florists have to find a niche to survive.

One of those growers is Michael Wray Barry of Rose Meadow Farm on Long Island, New York. He's been farming since 1983. He got his start growing field flowers like asters and zinnias. “Another farmer called them weeds,” he said. “What he meant was that you just couldn't make much money on those crops.” Barry switched to roses, which fetched a better price. “Little did I know that the domestic rose market was about to come to an end because of imports,” he said, and laughed. While most rose growers at the time sold their flowers to a broker who took them to the Manhattan wholesale flower district, Barry found this arrangement too risky. “A lot of these farmers never went to Manhattan,” he said. “Never! They trusted the broker to be honest about the prices their roses would bring at market and pay them their percentage.” Barry made a trip to the wholesale market and saw his roses selling for seven dollars per bunch. “The guy told me he was only getting two dollars a bunch,” Barry said. “That was it. I knew I'd have to sell the flowers myself after that.” He started driving his flowers directly to florists, but that proved difficult too. “They could buy imported roses for half the price,” he said. “Of course, they were bringing in an inferior product and putting themselves out of business in the process.”

Barry finally found a home for his roses in New York City's greenmarkets. His first location was in front of City Hall. “Turns out people get married at City Hall,” he said. “I could sell every rose I brought into town.” Eventually he was offered a spot at the Union Square market, where shoppers appreciate his old-fashioned varieties. “A rose that's just been picked—it glows,” he said. “It's alive. They're so fragrant, they open right up and they last a week. Those imports at the deli may look like a rose, but do they smell like a rose? Do they open?”

“You can call me and come get your flowers anytime,” he said. “I'll even ship them to you, but you have to give me a couple days' notice. It's just me and three employees. We're doing everything ourselves.”

So what's a socially responsible flower lover to do? After everything I've seen in the global flower market, I buy more flowers than ever—and I buy them from good farms everywhere. If I'm going to buy imported blooms, I make sure they come from a certified farm. And although I worry about the “flower miles”—the fuel required to ship flowers thousands of miles—I know that growing flowers in unheated hoophouses in balmy equatorial countries is incredibly energy efficient. I also know that workers in those countries genuinely want us to buy their products and support fair trade programs.

But I also buy locally grown flowers every chance I get. There's nothing better than a blowsy, perfumed, old-fashioned garden rose grown on a farm that I can visit whenever I want to. Try it sometime; Michael Barry would love to meet you.

Amy Stewart is the author of Flower Confidential: The Good, the Bad, and the Beautiful in the Business (Algonquin Books, 2007). Visit her online at amystewart.com.