My first encounter with a wild terrestrial orchid was as a child visiting my grandparents' summer home in Sag Harbor, Long Island, which in those days was not quite as stratospherically fashionable as it is now. The soil on their property was sandy, acidic, and coated in pine needles. As a result, their yard was perfect for harboring the native lady slipper orchid (Cypripedium acaule), a wildflower that bloomed there each spring in extraordinary profusion. My grandparents taught me at a young age that orchids were quite special and that it was strictly verboten to pick them. But I was fascinated by them, and one year I decided to pick a pudgy fistful to present to my grandmother, who was less than amused. Her rebuke left me mortified. 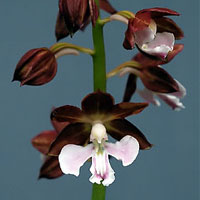 A few years later that mortification returned when I learned that picking these flowers removes their reproductive organs and halts the natural propagation of this protected population. The Convention on International Trade in Endangered Species of Wild Fauna and Flora (CITES, instituted in 1972 to monitor and limit international trade of threatened animal and plant species) has declared all members of the family Orchidaceae formally protected. There are strict controls on trade and import and export of all orchids.

Be certain, then, to procure your plants from reputable sources that ensure that their plants are nursery propagated and not collected from the wild. Many companies pride themselves on their conservation-mindedness and may also advertise their membership in the International Plant Propagation Society. Thanks to improved propagation techniques, terrestrial orchids are now widely available from specialized nurseries. Professionals typically employ one of two methods in breeding terrestrials: flasking, the in vitro germination of seed in sealed jars; and micropropagation, in which small pieces of plant tissue are cultivated with suitable nutrients under absolutely sterile conditions. These methods have allowed for the mass production of both species orchids and man-made hybrids.

The home gardener can increase his or her existing terrestrial collection by dividing established clumps. This is by far the easiest way to get more plants, but it's not foolproof—it is critical to do it in early spring before or just as growth begins, or as the flowers fade in midsummer. Both hardy and tropical orchids rely on fungal partners called mycorrhizae for seed germination and plant growth. To boost your chances of success in multiplying your home stock, plant each division with some of the soil from your original planting site and root ball, which contain those crucial mycorrhizae.

A Gallery of Hardy Orchids

Japan's Amitostigma keiskei has the largest flowers within its genus, which is made up of about 30 moisture-loving tuberous species indigenous to bogs and wet rocky outcroppings in the Himalayas, China, and Japan.

To say that A. keiskei is the largest of its genus is not to say much. These plants are diminutive—about 2 to 5½ inches tall! To showcase these Lilliputian lovelies, you would do best to select a planting site at eye level so that you can appreciate their beauty without having to stoop down. Try them, for example, in moisture-holding pockets in a vertical wall planting or in hand-hewn troughs set on a retaining wall. For the trough, you'll want to employ a moss "collar"; a top layer of living moss helps maintain a humid microclimate, and any living moss will do.

Amitostigma keiskei favors a shaded location. In May and June, its pink blossoms will appear. They have a deeply cut four-lobed lip with a very short spur, rather reminiscent (to me, an outdoor grower of tropical orchids) of an Oncidium. USDA Zones 6 to 10.

This genus of about 150 mostly terrestrial orchids is native to Japan, China, and Korea. Fairly easy to cultivate in the home garden, calanthes prefer well-drained, humus-rich soil in a sheltered site in dappled or partial shade. They are wonderful additions to a woodland or rock garden. And they can also be cultured in a cold alpine house using terra-cotta bulb or azalea pans (squat pots).

Calanthe discolor is a hardy Japanese native terrestrial with pleated 8- to 12-inch leaves that are evergreen to 15°F. In mid-spring it bears up to ten striking purplish-brown flowers with light rose-pink or white lips.

The Japanese Hizen hybrids (C. discolor x C. aristulifera) thrive in the darker corners of a woodland garden. In early spring, the plant sends up an 8-inch flower spike holding up to a dozen creamy light pink blossoms with a darker pink or purple three-lobed lip. All the calanthes mentioned here are hardy in Zones 7 to 9. 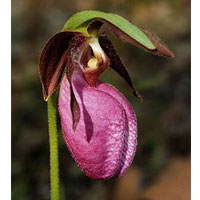 The lips of the orchids in this well-known genus are curled into a characteristic pouch, which I suppose a very careful miniature woman with teeny-tiny feet might just manage to slip on. Found in woodlands and marshy ecosystems in temperate areas of the Northern Hemisphere and in southern Asia and Mexico, lady slippers generally prefer moist, humus-rich, neutral to acidic soil in a sheltered site with partial shade.

The species that got me into so much trouble as a child, the pink lady slipper (Cypripedium acaule), has a pink bulbous lip beneath fuzzy, basset-hound-ear-shaped green-brown foliage. This lady slipper needs a bit more special treatment than its cousins. Its mycorrhizae prefer acidic, sterile soil—your garden-variety fertile soil will throw the fungus off balance. If you treat the C. acaule as it prefers, however, it will reward you amply. Native to Canada and the eastern United States, it is hardy in Zones 3 to 7.

Thanks to micropropagation, breeders have produced astonishing interspecific lady slipper hybrids, which after a decade are at last available to gardeners. Cypripedium 'Emil' (C. calceolus x C. parvifolium) is a vigorous grower that sends up 18-inch stalks in late May with blossoms that have a striking egg-yolk-yellow pouch topped by spiral-twisting burgundy sepals. Zones 4 to 7. 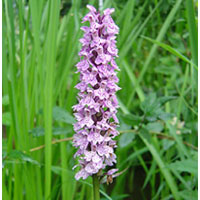 The Greek words daktylos (finger) and rhiza (root) aptly depict the underground tubers from which the plants in this genus arise. All 30 species of Dactylorhiza orchids are deciduous terrestrials native to marshy clearings and meadows in North America, Europe, North Africa, and Asia. Plant them in a rock garden or a meadow landscape in slightly alkaline, well-drained soil and give them partial shade.

The heath spotted orchid (D. maculata) is found from Europe through North Africa and is the hardiest species of Dactylorhiza. In mid-spring to early summer, its smallish mauve, rose-pink, red, or white flowers appear in dense terminal racemes on stems 6 to 24 inches tall. This orchid's name comes from the plant's lance-shaped leaves, which are sometimes plain but more often mottled with brown or purple spots. Zones 5 to 8.

For moisture-retentive soils or streamside sites, gardeners should consider the deciduous giant helleborine, also known as the stream orchid. A native of western North America, this species produces spikes of summer flowers ranging in color from purple to rose to yellowish green. The blossoms, although gracefully nodding, appear stiff and waxlike. Zones 4 to 8.

The E. gigantea cultivar 'Serpentine Night' has foliage that emerges jet black in spring, and its blooms are typically greenish purple. It is slower to spread than the straight species. Cultivate this orchid in humus-rich loam or leaf-mold compost. Zones 4 to 9.

Most people don't realize that this familiar North American woodland plant and frequent terrarium subject is a true terrestrial orchid.

This evergreen plant's common name comes from the appearance of its broad lance-shaped, bluish-green leaves, which resemble those of the plantain (Plantago), a common invasive weed. The prominent silvery-white veins in the leaves that distinguish G. pubescens remind me of a miniature variegated lungwort (Pulmonaria), though the plants are unrelated.

From late summer to autumn this orchid produces stems up to 16 inches tall bearing racemes of interesting but not glorious starry white flowers. (The real attraction of this orchid is its handsome foliage.) This little gem is the perfect addition to a shaded wildflower bed or border, where passersby can bend to admire its fine form and foliage. Culture it in sandy, humus-rich, acidic soil that's well drained. Zones 6 to 9.

Pogonia is derived from the Greek pogon (beard) and refers to the fringe that decks the flower lips of this genus. The only species found in North America, Pogonia ophioglossoides, is delicate in appearance and looks more like a spring-blooming Dutch bulb than a terrestrial orchid, with slender rose-pink tepals and a frilly lip. In late June through August, one pink flower tops the stem, and rarely two. Rose pogonias are almost always found is acidic, boggy conditions, usually growing in sphagnum moss. If you have a bog garden, be sure to plant them near a raised walkway or trail so they can be admired from solid ground. These plants do not usually bloom the first year after planting or division—they seem to resent these disturbances—so be patient for a couple of seasons. Zones 4 to 9.

This hardy orchid from eastern North America is an excellent choice for a native plant collection. Without asking your permission, this sprightly terrestrial will slowly colonize a small area through its tuberous underground growths. You won't mind at all, however, for its racemes of plentiful, nearly translucent small white flowers will delight you when they arrive in early autumn. Spiranthes cernua likes well-drained, humus-rich, leafy soil in partial shade. Plant it beside a path or walkway where you can admire it up close.

Spiranthes cernua var. odorata (some taxonomists argue that this might not be a variety but rather a separate species) bears stems with up to 50 white flowers, whose fragrance has been described as a cross between vanilla and jasmine. A strategically placed low stone bench or rustic wooden seat can facilitate smelling the blossoms without straining one's knees or back. Zones 4 to 8.

Scott D. Appell is a regular contributor to BBG publications and the author of four books, Pansies, Lilies, Tulips, and Orchids. He lives and gardens on the island of Vieques, Puerto Rico.