Whatever their design or intent, herb gardens are defined not by their organization but by the plants grown in them. If an herb is a plant with a use as a seasoning, fragrance, dye, fiber, or medicine, then an herb garden is a garden of useful plants. But don't be surprised to find species that have never had any practical application alongside the useful plants in today's ornamental herb gardens—some plants are simply too appealing to be excluded on purely technical grounds. Besides, our habit of dividing plants into the "useful" and the "ornamental" is relatively new. In medieval Europe virtually all plants were assumed to have some medicinal value. In the Renaissance, medicine, botany, and horticulture began to diverge, but they were slow to part ways and did not really separate for several centuries. 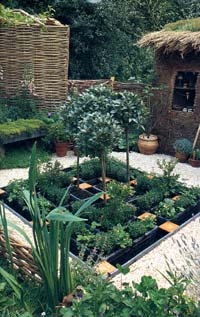 Practical as well as ornamental, formal herb gardens laid out in simple beds date back to medieval Europe and continue to be popular today, as this contemporary take on a 12th-century garden attests.

Garden layouts that date back to medieval and Renaissance Europe continue to strongly influence modern herb gardeners. Though we know very little about the dooryard gardens of simpler households—the ancestors of informal cottage herb gardens, in which useful plants were grown close to hand in unstructured plantings—we do have some knowledge about the structured gardens of the great medieval monasteries and royal palaces.

The earliest visual representation of a formal garden to survive the Middle Ages, found on the St. Gall plan, dates to the ninth century. This master plan for an ideal Benedictine monastery, which was never built as planned, includes a large, rectangular kitchen garden with 18 beds of vegetables and potherbs and a smaller square garden with 16 beds of medicinal herbs. This small healing garden is located next to the doctor's house and near the infirmary. Both gardens are walled and are laid out in two parallel rows of rectangular raised beds, each bed devoted to a single species.

This basic, utilitarian design is typical not only of monastic but of other medieval gardens as well. Enclosed gardens of rural manors and townhouses are depicted in a number of 15th-century illuminations in Piero de Crescenzi's popular treatise on horticulture and agriculture, Liber Ruralia Commodorum (On the Management of Country Estates). They too are made up of a number of small square or rectangular beds arranged in a simple grid pattern. The paths between the beds allow easy access to the plots.

This type of plan is still used today in our own vegetable gardens and is ideal for herb gardens, making it easy to cultivate and harvest the herbs and rotate short-lived crops of salad herbs and annuals. It is both functional in form and visually pleasing in its simplicity and neatness.

Not all medieval gardens were purely utilitarian. Unlike the gardens of the St. Gall plan, the small, private pleasure garden or "herber" was a place of beauty and refreshment rather than a home for useful plants. In the 13th century, Albertus Magnus gave directions for laying out an herber, recommending that the lawn at the center of the garden be surrounded by borders of sweet-smelling herbs such as rue, basil, and sage. These early pleasure gardens emphasized elements we still associate with our own ornamental herb gardens: enclosure, intimacy, and fragrance.

Created as teaching gardens by university faculties of medicine, the burgeoning botanical gardens of the Renaissance favored the narrow, rectangular beds of the medieval type. In the Chelsea Physic Garden in London, founded by the London Society of Apothecaries in the 17th century, the beds still in use today are in the medieval style. 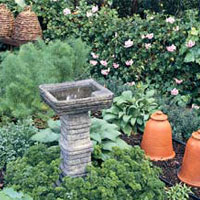 Large formal herb gardens were the domain of monasteries, manor houses, and palaces. Simpler households grew useful plants in unstructured dooryard plantings, where they would be close at hand when needed for cooking and other purposes.

The Renaissance also gave rise to the collector's garden, in which botanists organized their plants according to scientific principles and plantsmen exhibited horticultural rarities. Though many new plants were grown, the gardens themselves remained geometric in form and fairly simple in their organization, and their descent from the gardens of the Middle Ages is very clear.

As in the Middle Ages, formal gardens of the Renaissance favored all sorts of enclosures—brick, stone, wattle fencing, or hedges—to keep out animals and intruders. Throughout the 17th century, the practice of enclosing household gardens persisted. Even today, kitchen gardens are often enclosed for practical reasons (rabbits and deer are with us yet).

During the Renaissance, garden makers went beyond the basic forms of the medieval garden, organizing the squares and rectangles into more complex patterns. The knot, with its decorative interlacing bands of clipped herbs, became a feature of the pleasure garden. A geometric design within a square, rectangle, or circle was drawn on the ground, and each figure in the pattern was planted out with a single herb, closely clipped to maintain the design. Gardeners often filled in the spaces between the clipped outlines with colored sand or gravel. Elizabethan gardeners used lavender, germander, and santolina to lay out their knots. Boxwood became the plant of choice by the 17th century and is still the most popular today. Many patterns for these designs survive, and the knot lives on as the most elaborate and ambitious type of formal herb garden.

In the 18th and 19th centuries, farmers and householders usually mixed vegetables, herbs, fruits, and flowers in a single garden. Like the household gardens of the 16th and 17th centuries, utilitarian gardens were essentially medieval in character.

Late in the 19th century, in reaction to Victorian bedding schemes of newly imported exotic plants from around the globe, English ornamental gardeners became interested in "old-fashioned" plants and gardens. This trend had its counterpart in the Colonial Revival movement in the United States, in which writers such as Alice Morse Earle extolled the charms of the 18th-century American garden, with its box-bordered beds and traditional cottage-garden herbs and flowers.

In the first half of the 20th century, scholars like Agnes Arber reclaimed the botanical legacy of the Renaissance, and in the 1920s and '30s, Eleanor Sinclair Rohde helped popularize old English herbals, publishing many books and articles and designing herb gardens based on medieval and Tudor patterns. 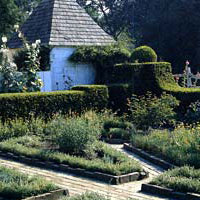 Productive gardens remained medieval in character for many centuries, as this recreation of a colonial garden shows. The idea of dividing plants into the "useful" and the "ornamental" is a relatively new development that started in the Renaissance as medicine, botany, and horticulture began to diverge.

In 1931, after years of study and experiment, Maude Grieve published her Modern Herbal, the first comprehensive encyclopedia of herbs published in English since the 17th century. This classic of herbal literature contains historical and horticultural information on hundreds of herbs, describing their chemical properties and medicinal and industrial uses. In 1933, American gardeners founded the Herb Society of America to promote the knowledge and appreciation of herbs. Its members have created and maintained many public and private herb gardens.

In the late 1940s Vita Sackville-West relaid and extended a small plot of herbs at her Elizabethan manor in Kent, England, creating the famous formal herb garden at Sissinghurst. Though Sackville-West used historical elements in her quartered design, its emphasis on color and texture makes it an outstanding and influential example of the modern ornamental herb garden.

Lately gardeners have become increasingly interested in the ornamental qualities of the herb garden. In the last 20 years the plant list has greatly expanded as new color forms and cultivars of herbs long grown for their usefulness have been developed. Many foliage plants that are considered herblike in texture, form, or fragrance are now admitted to the herb garden. Experiments with color in the herb garden have also inspired the inclusion of many purely ornamental flowering plants. At the same time, plants appreciated for their medicinal or other uses continue to find new homes among more traditional garden herbs.

This trend may be the logical outcome of the ornamental herb garden's evolution as a distinct garden type, but our definition of herb garden has become a little vague—how can we distinguish an herb garden with a mixture of perennials and ornamental annuals from a perennial garden or a mixed border that includes a large number of herbs? Perhaps the proportion of useful herbs to ornamentals doesn't matter. The important thing is to keep growing herbs and create our own place in a long tradition.

Deirdre Larkin is a horticulturist and historian with a special interest in the use of historical techniques in restored and re-created gardens. She worked for ten years in the gardens of the Cloisters branch of the Metropolitan Museum, in New York City, where she continues to lecture on plants and gardens in medieval life and art. She is an instructor for the New York Botanical Garden and a consultant on garden projects and programming to the Center for Medieval Studies at Pennsylvania State University. She gardens in upstate New York.