After a lifetime of growing edible plants, I've come to the conclusion that "oregano" should be a botanical category of aroma and taste rather than the common name for any one herb. After all, there are so many plants with the requisite essential oils that provide oregano's heady, easily recognizable fragrance and piquant flavor. Most folks in the U.S. are familiar with common oregano (Origanum vulgare), and many have used Greek oregano, Italian oregano, and Sicilian oregano—all cultivars of O. vulgare ssp. hirtum. Some even know about Turkistan oregano (Origanum tytthantum) from central Asia and showy oregano (O. pulchellum), which is popular in the Mediterranean region.

But the oregano experience is not confined to a single genus, Origanum. Take, for example, Cuban oregano, or Spanish thyme, called simply orégano in Spanish. This aromatic shrub and oregano analog is neither oregano (Origanum) nor thyme (Thymus), nor is it from Cuba or Spain, for that matter. The scientific name of this African native is Plectranthus amboinicus. 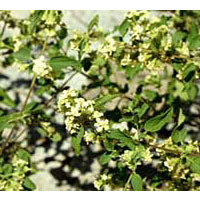 Origanum and Plectranthus both belong to the Lamiaceae, or mint family, so you'd be forgiven for thinking that it's all just a family thing. But then along comes yet another wonderful oregano wannabe: Mexican oregano (Lippia graveolens)—also called orégano in Spanish—a member of the Verbenaceae, or verbena family. Little known in North America, this "oregano" is a great acquisition for plant collectors and herb gardeners alike.

Though not a true oregano, Mexican oregano is native to Mexico, as well as Guatemala and parts of South America. A somewhat ungainly shrub, it grows up to five feet tall and wide. Its brittle branches are very narrow, stiffly arching, and arranged in a seemingly haphazard manner. (The plant responds extremely well to pruning, so consider espaliers or topiaries as alternatives to the natural zigzag form). Its dark green, highly fragrant, corrugated foliage is minuscule—about 1/3-inch long by 1/8-inch wide. Tiny, starry-white flowers are borne intermittently throughout the year in the leaf axils.

Although a trifle difficult to find commercially (one nursery source is G.S. Grimes Seeds; 800-241-7333), Mexican oregano couldn't be easier to cultivate. Full sun, heat, and fertile, well-drained soil are all the plant requires. Average moisture is just fine. Lippia graveolens is hardy in USDA Zones 10 and 11. Gardeners in Zone 9 might risk it outside all year, but heavy, cool, wet winter soils will be its demise.

Farther north, try Mexican oregano as a container specimen outdoors in warm weather and overwintered indoors in a greenhouse or south-facing windowsill. Indoors it will relish the same conditions as bay or rosemary—cool temperatures and fresh, circulating air. Watch for spider mites, whiteflies, and mealy bugs. Propagation is a breeze from ripe tip cuttings.

Mexican oregano has a sweetness and intensity that many gourmets prefer to the flavor of the true European or Mediterranean species. The leaves are a wonderful flavoring for fish, meatballs, sausage, tomato sauces, or any recipe requiring a strong oregano essence. Trim off some of the plant's thicker branches and utilize them as flavor-enhancing skewers for seafood or poultry shish kebobs or vegetable brochettes. Whole branches can be strewn over hot charcoal to impart a fantastic taste to grilled foods.

In its native Mexico, the herb is sometimes called té de pais ("country tea"), because the dried leaves are brewed into an herbal tea. It is also employed in salsas, pozole (Mexican-style hominy soup, usually prepared with pork), adobos (strongly flavored Mexican seasoning pastes), and rajas (roasted and seasoned chile strips used as filling for tortillas or quesadillas or as a base for more complex dishes).

Preheat the broiler. Place all the vegetables on a cookie sheet lined with lightly oiled aluminum foil. Place the sheet under the broiler. Timing is critical here; using a pair of tongs, turn the vegetables so that they broil evenly. Remove the garlic when lightly browned (a couple of minutes), and place in the bowl of a food processor. Remove the onions when wilted, soft, and lightly browned and add to the food processor. Allow the peppers and tomatoes to blacken completely (about 10 to 15 minutes). Peel the tomatoes and peppers (remove seeds if desired), coarsely chop them, and add to the processor. Pulse the processor a few times to make a coarse-textured purée. Place the salsa in a small saucepan and slowly bring it to a simmer, stirring gently but constantly. Add the Mexican oregano and cook for five more minutes. Remove it from the heat and stir in the cilantro. Taste for seasoning and add salt, if desired. Makes about 2 cups.

Scott D. Appell is a regular contributor to BBG publications and the author of four books, Pansies, Lilies, Tulips, and Orchids. He lives and gardens on the island of Vieques, Puerto Rico.

Eat Local: How to Use Edible Flowers ›