Orchids and How They Grow 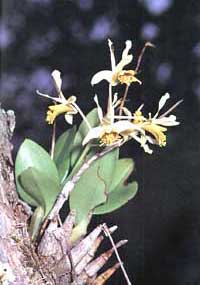 Orchids are found on all continents except Antarctica, but the vast majority, such as Dendrobium delacourii, which grows in Thailand, are native to the tropics.

The orchids are generally considered to be the most diverse plant family, with estimates of their numbers ranging from 20,000 to 30,000 species in over 800 genera. This represents about 10 percent of all flowering plant species. Recent DNA research suggests that the orchids, at more than 90,000,000 years old, are among the most ancient flowering plant families. They are still evolving rapidly into new species. For example, many endemic species in the genus Telipogon are found in the Andes Mountains in areas that were buried under glaciers as recently as 10,000 years ago.

Like all monocots, including irises, lilies, and gingers, orchids are flowering plants that have only one seed leaf and typically lack woody tissue. However, orchids are noteworthy for having the most specialized flowers and habits in the entire group. Among the most distinctive characteristics of orchids are their flowers. All orchids have a single reproductive structure, called the column, which is formed by the fusion of the male stamens and female style. These are separate in the flowers of the other families listed above. Orchids also have a modified third petal called a lip or labellum and produce enormous numbers of very tiny seeds.

Orchids are found on all continents except Antarctica, from above the Arctic Circle in the north to Tierra del Fuego and Macquarie Island in the south. However, the vast majority of orchid species are native to the tropics, and their numbers increase with proximity to the equator. Many orchid species are endemic, meaning they are found only in a very specific area, such as a particular mountain ridge, and nowhere else. The richest diversity of orchid species is found in the lush tropical forests of equatorial South America, Southeast Asia, and New Guinea. New species are constantly being discovered, particularly in these areas.

Orchids tend to be associated with hot, steamy tropical jungles, and many do come from these areas. In Borneo, for instance, orchids reach their greatest expression in the hot lowland forests from sea level up to about 3,000 feet in elevation. But in most of the tropics, the quantity and diversity of species increases dramatically from about 3,000 to 10,000 feet in the moderate climates of wet, montane forests. Here daytime temperatures average 70°F to 80°F, and nights are 15 to 20 degrees cooler. At higher elevations, the quantity and variety of orchids diminish, reaching their limit in the snow and cold above 14,000 feet.

Orchids vary tremendously in size. Several of the Vanilla species, a genus of vining orchids, can reach more than 100 feet in length, and Sobralia altissimum, from Peru, has been recorded at up to 44 feet in height. But for sheer mass, the king is Grammatophyllum speciosum; native to Southeast Asia, it perches in the crotches of large trees and produces growths up to 20 feet long and clumps weighing over two tons. The smallest orchid is probably Platystele jungermannioides, which is less than a quarter of an inch tall.

The family is so large and widely distributed that it is no surprise that orchids exhibit a remarkable diversity of growth forms and survival strategies. Most orchids are either epiphytes or terrestrials, though they may also be lithophytic (grow on rocks) or, in the case of Habenaria repens, aquatic. 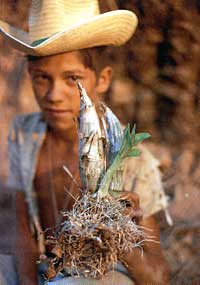 Most epiphytic orchids, such as this Catasetum, come from areas with a pronounced dry period and have permanent pseudobulbs in which moisture is stored.

Approximately 70 percent of all orchids are epiphytes, plants that grow on other plants. Epiphytic orchids are largely confined to the tropics and subtropics, where day length and the aspect of the sun vary little with the seasons and temperature ranges are generally stable and above freezing. While almost any part of a tree can be host to epiphytic orchids, the largest number of orchid species prefer the inner branches and limbs of large, mature trees, midway up, in lightly shaded conditions. Certain tree species consistently harbor orchids. Rough-barked trees that allow some moisture to remain in the cracks and crevices tend to be more conducive to orchid growth than smooth-barked trees. However, for some epiphytes, bark quality is not important as long as there is an accumulation of humus, or organic debris.

Typically, epiphytic orchids have prominent, succulent stems called pseudobulbs that enable them to endure dry periods. Their leaves may be thin and deciduous or leathery and persistent. Their root systems are not as extensive as those of terrestrial orchids but are highly efficient at quickly absorbing moisture and nutrients. Epiphytic orchids are not parasites; they derive no nutrients directly from their hosts. However this is not to say that orchids are never detrimental to the trees. Frequently the weight of epiphytic orchids, mosses, and accumulated wet organic debris on the limbs of large trees can cause them to break off and crash to the ground.

As the name suggests, terrestrial orchids grow on the ground, rooting in humus. For example, it is common for orchids, such as most paphiopedilums, to be found growing in a layer of humus over the top of rocks and clay. Rather than pseudobulbs, many terrestrials such as Nervilia and Anoectochilus species have well-developed subsurface tubers, corms, or thick fleshy roots. Generally these orchids have thin leaves, often with attractive patterns. Interestingly, the two species of the genus Rhizanthella native to Australia not only grow in soil but grow completely underground; only their flowers rise to the soil surface to be pollinated by insects.

Orchids, like plants in other families, have evolved a number of strategies for obtaining nutrients. Most orchids obtain sustenance from rotting leaves and other organic matter that falls or washes down around the plant. Orchids in the genus Catasetum develop masses of fine, rigid, vertical "basket" or "nest" roots around their bases. These roots trap and concentrate leaves and other organic debris around the plants, creating miniature compost heaps that give the plants an advantage in the competition for food.

Some orchids, called myrmecophytes, have developed symbiotic relationships with ants to obtain nutrients. Coryanthes species grow almost exclusively in large arboreal ant nests where their roots can readily take advantage of the accumulated organic debris. These species have seeds with oily appendages called eliaosomes that attract the ants, which then carry the seeds back to their nests. In a more complex physical adaptation, species such as Schomburgkia tibicinis have large, thick pseudobulbs that become hollow as they age. A small opening at the base eventually appears, allowing ants to build their nests within the pseudobulbs. The nature of this relationship is not completely understood, but the orchids probably obtain a nutritional benefit as accumulated leaf litter and dead insect carcasses decay in and around the plants. The ants also effectively protect the flowers and buds from foraging leaf-eating insects and wildlife.

While temperate climates experience dramatic seasonal swings in temperature and day length, the tropics are usually defined by somewhat warmer or cooler periods or pronounced wet and dry periods. Some places experience little if any variation, and others go for months at a time without significant rainfall, then are deluged by a wet season of daily downpours. 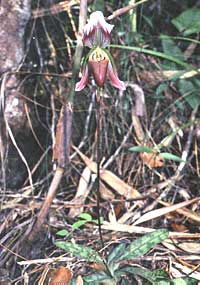 Paphiopedilum callosum, which grows on jungle slopes in Malaysia, has a terrestrial growth habit.

Tropical orchids have adapted to the wet and dry cycles in various ways. In areas where moisture and temperature are consistent in all seasons, most orchids lack pseudobulbs, or their pseudobulbs are noticeably less developed. In shady situations the plants usually have thin, persistent leaves, such as with many species of Paphiopedilum. In places with higher sun exposure, the leaves tend to be stiffer and more leathery, as with Vanda species. These orchids are almost constantly in a state of growth, with little or no defined rest period.

The majority of epiphytic orchids, including many well-known species of Oncidium and Cattleya, come from areas with a pronounced dry period of limited duration and exposure to broken bright light. These plants tend to have prominent pseudobulbs and persistent, tough, leathery leaves.

In the harshest habitats, where the dry season is measured in months, more dramatic physical adaptations are found. Many of these plants have a specialized metabolic process typically seen in cacti, known as Crassulacean acid metabolism, or CAM, which minimizes their need for water. Typically these orchids also exhibit one of two foliage forms. In the most common adaptation, orchids, such as Catasetum species, have thin, deciduous leaves but prominent fleshy pseudobulbs that retain the moisture and nutrients needed to survive. Orchids such as Brassavola nodosa have small pseudobulbs but thick succulent leaves that function like pseudobulbs. In order to survive, the plants store moisture in the pseudobulbs or the succulent leaves.

Orchids are adapted not only to seasonal cycles but also to the effects of convectional weather. The daily cycle of warming and cooling generally results in a difference of about 15 to 20 degrees Fahrenheit between day and night temperatures; it also creates fog, dew, and, in the mountains, cloud effects.

This daily cycle also generates constant breezes that quickly dry plants up in the trees. Epiphytic orchid roots are specially adapted to these conditions. Composed of a wiry central core surrounded by thick spongy tissue called velamen, they are able to clasp tree bark and quickly soak up moisture before it can run off or evaporate.

David Horak has been growing orchids for more than 30 years. He is the curator of orchids and the Robert W. Wilson Aquatic House at Brooklyn Botanic Garden.