Orchids and Their Pollinators

Some flowering plants are promiscuous, relying on enticement and reward to lure whatever insect comes along. But orchids typically have exclusive relationships with their pollinators. These are usually bees, wasps, and flies, but many orchids also utilize moths, butterflies, fungus gnats, or birds to cross-pollinate their flowers. While the ways that various species entice pollinators to visit their flowers and carry their pollinia (pollen masses) off to a flower on another plant vary tremendously, they often employ complex, frequently deceptive strategies to achieve success.

Governed by the weather and pollinator activity, orchids regulate their bloom time to increase the likelihood of successful pollination. The length of time that flowers remain open and viable varies considerably from a few hours in Flickingeria species to as much as nine months in species such as Dendrobium cuthbertsonii.

Some orchids flower only once or twice a year at very specific times. Others have flowers opening so frequently during the course of the year that they are almost constantly in bloom. Orchids that bloom frequently or for extended periods certainly have less difficulty coordinating blooming with others of their kind, increasing the chances of successful cross-pollination. By contrast, species with short bloom periods would seem to be at a severe disadvantage. Orchids in the New World genus Sobralia, whose flowers typically are open for no more than one day, solve this problem by relying on a group temperature signal to achieve simultaneous bloom. Several days after a trigger temperature is reached, all the individual plants in a given population flower at the same time.

Orchids utilize a variety of intricate strategies for attracting the many specific pollinators on which their survival depends. In virtually all cases the orchid and pollinator have evolved together. 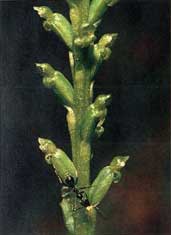 Microtis parviflora lures its ant pollinator with a reward of nectar. 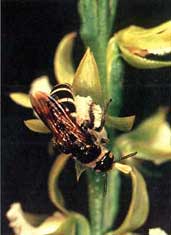 Prasophyllum fimbria uses deception to attract its pollinators: It seems to offer a food reward but doesn't.

Orchids commonly use nectar to entice their pollinators, but they also employ color, shape, or fragrance, and even mimic the flowers of other plants. Color is often important for animals active during the day. For example, orchids pollinated by hummingbirds and butterflies tend to have red, orange, or pink tubular—but not necessarily fragrant—flowers. They frequently have yellow blotchy patterns to mimic the anthers and pollen of the other plant types visited by these nectar lovers, but this mimicry is deceptive because the orchids often offer no nectar reward. The flowers of most moth-pollinated species, such as angraecoids, are green or white and are often very fragrant only at night so they can be found by these primarily night-flying insects. The flowers of orchids pollinated by flies or carrion beetles, such as many of the Bulbophyllum species, typically come in browns and fleshy reds and emit the odor of rotting meat. The stench of Bulbophyllum beccarii is so foul that it has been said to smell like "a herd of dead elephants." 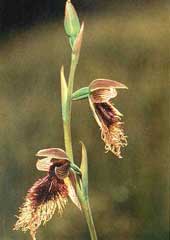 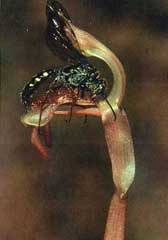 A male wasp pollinates Chiloglottis reflexa while attempting to copulate with the flower.

Little iridescent euglossine bees can be seen buzzing in the canopies of Central American forests when the bucket orchids (Coryanthes) are in bloom. As the name suggests, in these species the lip of the flower forms a bucket filled with a sweet-scented viscous liquid. Just above, they also have a rounded pad from which the male bees scrape off fragrant oils they pack into sacks on their back legs and use to court females. Actually elaborate traps, the surface of the flower is slippery, and occasionally a bee loses his footing and falls into the bucket. The only way to escape and avoid drowning is through a narrow opening at the base of the lip. As the bee squeezes his way through, his back scrapes against the column and the two pollinia are deposited on his back. Fortunately for the orchids, the bees seem to have short memories and are easily fooled: After drying himself and flying off, the bee will often visit another flower and repeat the process, this time depositing the pollinia on the stigma (female part) of the flower. 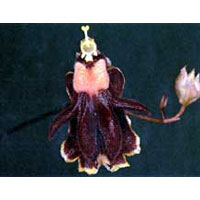 Some orchids lure their pollinators through sexual deception. Oncidium henekenii is pollinated by male bees trying to mate with the flower, which resembles a female bee.

Some orchid flowers deceive their pollinators by mimicking the appearance and scents produced by female insects. In European species of the genus Ophrys, flowers have a labellum that looks like the body of a fetching female bee or wasp—complete with the requisite shape, iridescent colors or colorful markings, and hairs. They also exude a scent that simulates the pheromones produced by receptive females. Each species of Ophrys is generally pollinated by its own species of insect. When the male lands on the flower, it grabs the labellum and attempts to copulate with it. In the process, the flower deposits pollinia on the insect's head, to be carried and placed on the next flower he visits. Other orchids, such as species of Oncidium, produce flowers that resemble the males of certain territorial bees or wasps. Seen as competitors, these flowers are attacked. They are shaped in such a way that the attacking insect is inevitably placed in contact with the pollinia or stigma.

Where the pollinia become physically attached to the pollinator and how they get there is individual to each given orchid species. One example involves euglossine bees, common shared pollinators for orchids in Central and South America. The structural differences in the various flowers ensure that the pollinia are attached to a part of the bee specific to each orchid species: The pollinia of one may be attached to the insect's eye, that of another to the top of the thorax, and that of still another to a foreleg. When the pollinia-loaded bee encounters an orchid flower, only the pollinia in the proper position for that species will come in contact with the stigma and accomplish pollination.

In the genus Catasetum, the pollinia are ejected when the pollinator touches a specifically placed trigger and are literally shot onto the insect's back. Some species of Bulbophyllum and Porroglossum have hinged lips that snap shut or tip closed, temporarily pinning the insect against the column so that the pollinia can be properly secured.

In the wild, the chance of successful pollination varies tremendously among orchid species. In some, nearly every fertile flower is pollinated; in others, few or none are. Once pollinated, the flower begins to collapse and the ovary, located directly behind the sepals, begins to swell. The time it takes for orchid seed to mature varies from a few days to nearly a year. When finally mature, the fruit, a capsule, splits open and the seed spills out. 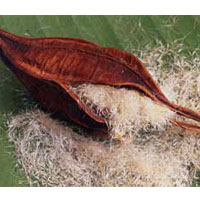 Orchids produce enormous amounts of minute seeds that are disbursed widely by the wind.

Most orchid species have very specific needs regarding where they are able to germinate and grow. To ensure that seeds find these ideal conditions, orchids produce vast amounts of minute seeds, which are disbursed widely by the wind. Harvard University's Oakes Ames, a prominent early-20th-century orchid researcher, reportedly spent a rainy afternoon counting the seeds in an individual orchid capsule and arrived at the astonishing total of 3.5 million.

Because orchid seeds are so small, however, they contain virtually no endosperm, the food reserve on which young plantlets typically depend prior to the development of roots and leaves. To germinate in the wild, tiny orchid seeds must become infected by a mycorrhizal fungus that produces substances necessary for germination and growth.

Of the very few orchid seeds that are able to find ideal conditions to germinate, few survive to maturity. It generally takes most wild orchids five to seven years to reach blooming size. Mortality rates are high during the fragile early stages of orchid growth.

Early efforts to artificially raise orchids from seed in the 19th century were unsuccessful until growers discovered that seed sowed at the base of the mother plant would sometimes germinate. This was possible because the parents were still naturally infected with the necessary mycorrhizal fungi. However, even this technique resulted in relatively few plants, so the commercial orchid industry continued to depend on vast quantities of wild-collected plants to satisfy the constant demand of wealthy collectors.

In 1922, Louis Knudson discovered that nearly 100 percent germination could be achieved by starting seeds in flasks on sterile media fortified with nutrients to feed the young plants. Some years later the process of mericloning was developed, allowing the mass production and marketing of individual cultivars. Thanks to these achievements, combined with humanity's insatiable desire to create artificial hybrids—presently more than 100,000 have been registered—today orchids are produced by the millions. They are now among the most widely grown and popular flowering pot plants in the world.

For a comprehensive discussion of orchid ecology, consult the monumental work The Orchids: Natural History and Classification (1981, 1990), by Robert L. Dressler.

Anatomy of an Orchid Flower

Despite the astonishing diversity found in the thousands of wild species and man-made hybrids, orchid flowers show an unmistakable family resemblance. Orchid flowers are generally bilaterally symmetrical—only a single imaginary line can be drawn through a flower to create a mirror image.

A typical orchid flower has three sepals (the outer segments that protect the bud before the flower opens), alternating with three petals. The petals and sepals may be similar or not, showy or inconspicuous.

The middle petal, which is always opposite the column, is usually quite different from the others. Called the lip or labellum, it comes in a variety of shapes, depending on the species, and can be wavy or fringed or covered with hairs or other structures. The labellum often serves as a landing pad and attractant for insect pollinators.

The most distinctive aspect of orchid floral anatomy is the column, the single reproductive structure formed by the fusion of the male stamens and female style, which are separated in the vast majority of plant families. Most orchids have a single fertile anther (flower structure where pollen is produced) located at the tip of the column.

In most orchids, pollen is not loose and granular when ripe but rather is packed into a waxy mass called a pollinium. Pollinia usually occur in pairs, but in some species they are found in groups of up to eight. The pollinia typically share a single small sticky tab called a viscidium, which adheres to the pollinator when contact is made. 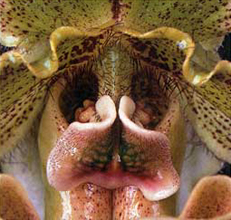 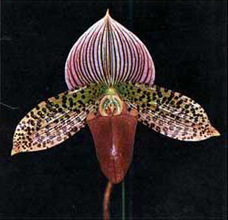 There are exceptions to the typical orchid flower configuration, shown above. For example, slipper orchids such as paphiopedilums, considered a primitive branch of the orchid family, have a pouch- or slipper-shaped labellum, below left. They also have two fertile anthers instead of a single anther, below right. A third anther has evolved into a fleshy plate, called a staminode, which sits in front of the other two and assists in luring and guiding pollinators across the anthers and stigma.

David Horak has been growing orchids for more than 30 years. He is the curator of orchids and the Robert W. Wilson Aquatic House at Brooklyn Botanic Garden.