The Garden is temporarily closed. See program updates in light of the COVID-19 situation.

Without a doubt the most popular orchids today, Phalaenopsis are being grown by the millions in Florida, California, Hawaii, and other relatively warm regions of the United States, as well as in Brazil, Costa Rica, the Netherlands, and many countries in the Far East, including Taiwan and Japan. Previously only available at orchid shows and in flower shops, Phalaenopsis are now found in most garden centers and even in supermarkets and hardware stores. They are popular because they are relatively inexpensive, easy to grow, and very rewarding. They mature fast, the flowers are nicely displayed above the foliage, and they can bloom for extended periods of time, normally during the winter, but often well into summer.

To make cultivation easier, Phalaenopsis are usually divided into five groups. One group includes the species. Then there are three groups of standard-size hybrids: large-flowered white, pink, semi-alba, and candy-striped; novelty hybrids in newly developed colors and patterns, which include reds, oranges, yellows, as well as flowers with spots, bars, and blotches; and multiflora hybrids with an abundance of smaller flowers. And finally there are small-flowered miniature hybrids. 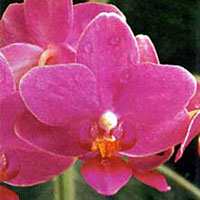 There are hundreds of hybrids to choose from, including Phalaenopsis Brother Derek (P. Brother Fancy x P. equestris).

Phalaenopsis species come from an area that includes northern India, southern China, and northern Australia. There are approximately 80 species in the genus, which is divided into five subgenera, two of which are further divided into sections. In general, each subgenus and section has its own cultural requirements. The plants are epiphytic, growing on trees, or lithophytic, growing on rocks.

In nature, phalaenopsis are predominantly found in three distinct habitats, with the majority living in constantly moist or humid areas. They are also found in regions with seasonally dry or seasonally cool weather. The challenge in growing Phalaenopsis species lies in identifying the plants, determining their habitat requirements, and providing growing conditions to match.

The species native to warm and humid habitats from the subgenus Phalaenopsis are easiest to grow and most commonly found in cultivation. They include Phalaenopsis amabilis, P. aphrodite, P. philippinensis, P. sanderiana, P. schilleriana, P. stuartiana, P. equestris, P. lindenii, and P. pulcherrima (formerly Doritis pulcherrima). These plants are also the basis for the majority of hybrids available today, a boon to gardeners, as the hybrids are also easy to grow and require the same type of warm and humid growing environment as their parents.

The second group of species, also found in cultivation, is from the subgenus Polychilos and includes Phalaenopsis amboinensis, P. gigantea, P. lueddemanniana, P. venosa, P. bellina, and P. violacea. These plants also come from a warm and humid habitat. The flowers of these species are brightly colored and have a waxy texture.

The plants in the third group are most difficult to grow. These are miniature species from the subgenera Parishinae and Aphyllae and include Phalaenopsis gibbosa, P. lobbii, P. parishii, and P. wilsonii. These plants grow at higher elevations in seasonally cool and dry areas, and they are a challenge to cultivate. They should not be grown together with the other Phalaenopsis species because they require cooler and dryer conditions. 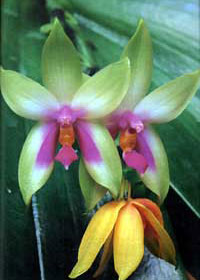 The most commonly grown Phalaenopsis, accounting for more than half of all the orchid plants being produced commercially, are the large-flowered hybrids that growers have propagated by seed or with the help of tissue culture.

Most people who grow Phalaenopsis seem to start with whites and pinks and then move on to brightly colored novelties that come in shades of yellow, red, and orange. The quest for novelties started about 40 years ago when a standard white flower or a standard pink flower was crossed with a brightly colored species. The ultimate goal of the hybridizer was to produce brightly hued flowers that have the same shape and size of the whites and pinks. Today novelty flowers are almost as large as the standards, and they have the same round form. Species like Phalaenopsis amboinensis, P. venosa, P. lueddemanniana, P. pulchra, P. violacea, P. bellina, and P. gigantea were the ones originally used in hybridizing. Today, hybrids of these species are being used to continue the breeding trends to increase the flower size and the number of flowers in the inflorescence; and once in a while the species are used again to intensify the color. 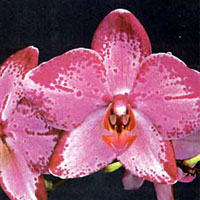 Doritaenopsis Yu Pin Angel 'Maria Teresa': A Doritaenopsis is a cross between two related genera, Doritis and Phalaenopsis, which are so close that botanists debate whether Doritis should be included in the genus Phalaenopsis.

And then there are the reds. To create a red Phalaenopsis, a yellow flower (either a species or a hybrid) is bred to a purple species or hybrid. This results in flowers with diffused pigmentation: Color is evenly distributed throughout the flower, giving the appearance of solid coloration. Shades range from orange-red to deep lavender-burgundy. Some examples are Phalaenopsis Cordova, Doritaenopsis Lonnie Morris, P. Sogo Pony, P. Sogo Rose, and P. Sogo Grape. In certain hybrids the color pigmentation is concentrated in some areas of the flower, and red spots appear over a yellow- or cream-colored background. Phalaenopsis Brother Purple, P. Sogo Prince, and P. Golden Peoker are a few spotted reds.

Desert tones, or art shade flowers, which include orange, copper, rusty red, or bronze tones, result from the combination of red and lavender color pigment found on the surface of the flower with yellow and green color pigment found inside the flower tissue. The blending of pigments can't be controlled in breeding, and as a result, the progeny come in a broad spectrum of colors. Often the flower colors change as the flowers age, but in some hybrids the pigmentation remains stable and beautiful colors result. Especially noteworthy are Phalaenopsis Sweet Memory, P. Zuma Aussie Delight, P. Pago Pago, and P. Brother Sara Gold.

Finally, a new line was recently created in Taiwan, when a mutated form of Phalaenopsis Golden Peoker was used in breeding. This resulted in harlequin-type flowers. They have a white or yellow base color and are adorned with randomly distributed large dark, almost black blotches that resemble ink spots. They vary in size and shape and are different from flower to flower, creating very unusual patterns. This can be seen in Phalaenopsis Ever-Spring Light, P. Yu Pin Pearl, P. Yu Pin Panda, and P. Bright Peacock. 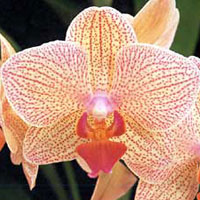 Phalaenopsis such as this P. Brother Buddha x P. Baby Angel 'Talisman Cove' grow easily in a bright window, with little or no sun.

Multiflora, or sweetheart, Phalaenopsis were developed in California by Herb Hager, considered by many as the father of Phalaenopsis hybridizing. He focused his efforts on species with large numbers of smallish flowers in each inflorescence. Working with Phalaenopsis equestris, P. stuartiana, P. lindenii, and P. amabilis var. formosana, he created P. Be Glad, P. Cassandra, and P. Vilind. Today, there are quite a few multiflora Phalaenopsis available that have all the features Hager had envisioned: smallish plants with a multitude of brightly colored flowers displayed either on several inflorescences or on one branched inflorescence. Examples are Phalaenopsis Carmela's Pixie, P. Zuma's Pixie, P. Timothy Christopher, P. Be Tris, and Doritaenopsis Quevedo.

This line of breeding is somewhat new, and hybrids are sometimes difficult to come by. Miniature species, such as Phalaenopsis lobbii and P. parishii, are bred with other small-flowered Phalaenopsis. The culture of these hybrids is also somewhat different because the species used in breeding come from cool or dry habitats, and consequently, they require lower day and night temperatures and lower humidity. Some miniatures are Phalaenopsis Micro Nova, P. Mini Mark, and Doritaenopsis Anna-Larati Soekardi.

Phalaenopsis grow easily in a bright window, with little or no sun. An east window is ideal in the home; shaded south or west windows are acceptable. In overcast, northern winters, the plants may need a full south exposure. It's easy to provide artificial lighting. Place four fluorescent tubes in one fixture supplemented by incandescent bulbs about 6 to 12 inches above the leaves for 12 to 16 hours a day, following natural day length. In a greenhouse, provide enough shade so that the available light is between 1,000 and 1,200 foot-candles. No shadow should be seen if you hold your hand one foot above a plant's leaves. 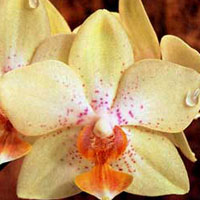 Most people who grow Phalaenopsis start with the standard whites and pinks, then move on to brightly colored novelties in shades of yellow, red, and orange. Phalaenopsis Cassandra x P. Brother Nugget, an unregistered hybrid, above.

Phalaenopsis usually require above 65°F at night and between 75°F and 85°F or more during the day. Higher temperatures force faster vegetative growth, but they must be accompanied by brighter light, humidity, and air movement; the recommended maximum is 90°F to 95°F. To initiate flower spikes, night temperatures to 55°F are desirable for approximately two weeks in the autumn. Fluctuating temperatures can cause bud drop on plants with buds ready to open.

As they have no major water-storage organs other than their leaves, Phalaenopsis must never dry out completely. Water plants thoroughly, then wait until they are nearly dry before you water again. In the heat of summer in a dry climate, this may be every other day; in the winter in a cool northern greenhouse, it may be every ten days. To prevent rot, water only in the morning, so that the leaves are dry by nightfall.

The recommended humidity is between 50 and 80 percent. In a more humid climate or in a greenhouse, the air must be moving. Leaves should dry as fast as possible, but always by nightfall. In the home, set the plants on trays of gravel, partially filled with water, but keep the pots out of the water. Fluctuations in humidity can cause bud drop on plants with buds ready to open. 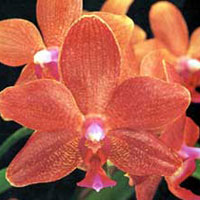 Especially when the weather is warm and the plants are actively growing, it is important to fertilize regularly. Applying a high-nitrogen fertilizer, such as 30-10-10, twice a month is appropriate when bark-based media are used. Otherwise, a balanced fertilizer, such as 20-20-20, is best. In warm weather, apply balanced fertilizer at half strength with every watering; when the weather is cooler or overcast, apply a weaker fertilizer solution twice a month.

It's best to pot Phalaenopsis in the spring or early summer, immediately after flowering. They require a porous mix and must be repotted every year. Mature plants can grow in the same container in a medium-grade mix until the potting medium starts to decompose, usually within two years, at which time the plants should be repotted. If the plants are left in a soggy medium. root rot occurs. Seedlings usually grow so fast that they should be repotted in a fine-grade medium every year. To repot, remove the old medium from the roots, trim soft, rotted roots, and spread the remaining roots over a handful of medium in the bottom of a new pot. Fill the rest of the pot firmly with medium, working it in among the roots so that the junction of the roots and the stem is at the top of the medium.

Carlos Fighetti has been growing orchids for almost three decades. He specializes in Phalaenopsis and paphiopedilums and has received more than 75 American Orchid Society awards. He is vice-president of the AOS and chair of its Historical and Library Committee as well as an accredited AOS judge. He has also served as president of the Greater New York Orchid Society and was the founding president of the International Phalaenopsis Alliance. He has written several articles for Orchids magazine and lectured at the World Orchid Congress.