I have been captivated by salvias ever since the late 1980s and early 1990s, when I lived, worked, and gardened in the San Francisco Bay Area. I was drawn to their exuberance of bloom, clarity of color, long flowering season, and textural and aromatic foliage. Even after a decade back in the Northeast, I delight in growing the tender Salvia clevelandii, a native Californian species with ashy gray-green leaves and sparkling violet-blue flowers. The pungent, rosy aroma of its leaves has the power to transport me back to the dry chaparral and sage scrub of the coastal California foothills. That's magical, and a lot cheaper than airfare!

Today, from spring through fall, salvias hold court in my garden and new nursery business in the picturesque Hudson Valley of New York (USDA Zone 5). Admittedly, many of them are tender in the region. But since the plants grow quickly, are relatively free of pests (whitefly can cause occasional problems) and diseases, and are remarkably diverse in fragrance, habit, and flower color, they are well worth the effort to replant each year. I give my salvias full sun and well-drained soil, and they are happy, undemanding plants.

Salvias are wonderful companions in the mixed border, providing the truest blue and brightest red flowers of any group of plants. The red ones, particularly those with long tubular flowers, are ideal lures and major nectar sources for hummingbirds as well as many species of butterflies. Many of the tender salvias begin to bloom in July and August in Zone 5, while others wait until September and early October to provide a burst of exquisite color that lasts until the curtain comes down with the first hard frost.

Some Background on Salvias

Call them salvias or sages—the two common names are often used interchangeably to refer to the entire Salvia genus. Both are derived from the Latin word salvus, meaning "safe," "whole," or "health"—a reference to the healing properties of some species, especially Salvia officinalis, the common sage. This lilac-blue-flowered salvia was a mainstay in medieval apothecary gardens and is still grown today in herb and vegetable gardens as a flavoring, medicinal cure-all, and ornamental.

Salvias belong to the Lamiaceae, or mint family, and compose the largest genus in that family. They have square stems (that, with age, sometimes become round) and opposite leaves. Their flowers, which are borne on terminal spikes, generally consist of colorful tubes with two lips of unequal length, the lower ones usually spreading. These flowers emerge from calyces, or whorls of sepals, which are also two-lipped and quite colorful and ornamental in their own right. Roughly 900 salvia species have been documented worldwide, over half of them native to the Americas. Add to that impressive number several hundred more hybrids and cultivars, and this spells trouble for a salvia addict like me.

Most gardeners are familiar with the truly hardy perennial salvias, among them Salvia azurea, Salvia officinalis, S. x superba (a catchall that includes S. nemorosa and S. x sylvestris), and their cultivars. All are cold tolerant to Zones 4 or 5. They are winter dormant and reliably reappear in the garden for years.

But there is a whole cast of out-of-the-ordinary perennial salvias native to Texas, California, Mexico, and Central and South America that generally behave like annuals in Zones 4 to 7 (and sometimes 8). These tender salvias are quite distinct from—and much more versatile and appealing than—the pedestrian annual bedding salvias (Salvia splendens cultivars) that often provide garish color and require constant deadheading to look good.

Last spring, my partner and I evaluated 60 different tender perennial salvias for habit, flower color, and time and length of bloom in our Zone 5 garden. The summer of 2002 was extremely hot and dry in the Northeast, and the salvias required occasional irrigation and staking, but otherwise they were left to their own devices. From this trial we selected 14 outstanding tender perennial salvias for colder winter regions of the Northeast, Mid-Atlantic, Midwest, Rocky Mountains, and Pacific Northwest. I've grouped them by color and briefly describe them below.

If you are looking for rich scarlet flower color, then look no further than this devilish cultivar of Salvia blepharophylla, a Mexican native. Planted out after frost, it grows to two feet tall and blooms from late August to frost. Its lance-shaped lustrous green leaves, suffused with purple tones, create an attractive foil in the front or middle of a border.

I love the long spikes of coral-red flowers on this salvia, particularly since they appear continuously from July through frost. The loose, bushy plant is native to high elevations in the Mexican Sierra Madre. It grows to four feet tall and benefits from some judicial staking early in its growth. Its triangular leaves are extremely gummy and will stick to you like Velcro, so be careful when handling or weeding around the plant or you might accidentally break off stems. Tuck it in among other perennials in the middle of the border and let it be. 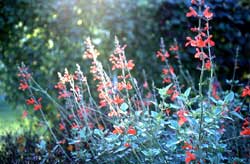 This hybrid salvia's 12-inch-long coral-red flower spikes are almost indistinguishable from those of Salvia darcyi, but the plant has a more compact, full-mounded form. Also, its attractive spoon-shaped gray-green foliage is not "clingy" and thus is easier to work around. 'Scarlet Spires' grows three to four feet tall and blooms continuously from July through frost.

Gardeners may be most familiar with this rapid-growing cultivar of the popular Brazilian native salvia. It sports dark red blossoms that dangle from a burgundy calyx. Yellow-green leaves with saw-toothed edges give the plant a very leafy look. It rises four to five feet tall and blooms from August until frost. I like to let it weave and cavort in my red border with Rosa glauca, Eupatorium maculatum (joe-pye weed), and the green-and-white-striped foliage of Calamagrostis x acutiflora 'Overdam'.

This selection from Mexico grows three to four feet tall and forms a bushy mound of enticing, pineapple-scented foliage. Hummingbirds adore its salmon-pink flowers, which open in mid- to late September and continue until frost. Zone 5 gardeners and migrating hummingbirds may only get to enjoy the blossoms for few weeks, but they'll be well rewarded. 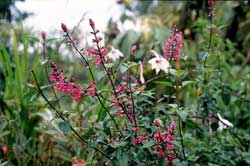 Native to arid regions of Texas and Mexico, this plant grows beautifully in dry, well-drained garden soil. 'Dark Dancer' sports delicate, deep fuchsia flowers that dance atop wiry stems. It grows into a two- to three-foot-tall shrub covered with small, two-inch, paddle-shaped leaves. In Zone 7 it can sometimes behave like a true perennial.

Looking for a hot flower color the likes of raspberry sorbet or—you guessed it—mulberry jam? Then try this relatively new selection of the roseleaf sage, another Mexican native. It offers graceful spikes of striking dark fuchsia-pink flowers and calyces held upright on thin, woody stems. It begins to bloom in mid- to late August and will grow four feet high in sun or partial shade.

Easily on my top-ten list, S. 'Waverly' rewards you with fuzzy white flowers blushed with pale lilac-lavender and cupped in beautiful maroon-tinged calyces. The long, 12- to 20-inch-high flower spikes bloom steadily from midsummer until frost and sparkle at dusk and on moonlit summer evenings. 'Waverly' grows up to four feet tall and has an elegant, upright form and crinkled, sage-green leaves.

This is a lovely plant, recently introduced by the UC-Santa Cruz Aboretum. It easily rivals Salvia 'Waverly' and, in my mind, may be even better! Similar in habit, its fuzzy lavender flowers are contrasted beautifully against deep smoky-pink calyces from August until frost. It grows four to five feet tall by the end of the season with great elegance and distinction. 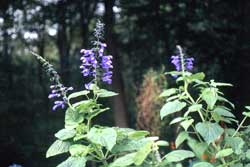 This magnificent salvia, native to Brazil, Paraguay, Uruguay, and Argentina, reaches five to six feet high and blooms freely from August until frost. Its large 1 1/2 inch-long royal-blue blossoms cupped by darker blue-purple calyces are magnets for hummingbirds. Everything about the plant is big, bold, and beautiful, including its refreshing mint-green foliage. Worthwhile cultivars include 'Argentine Skies', which offers soft sky-blue flowers, and 'Black and Blue', which grows four feet high, has lighter-colored foliage than its parent, and offers deep, gentian-blue flowers contrasted with purple-black calyces.

A hybrid of S. farinacea and S. longispicata, this salvia is a larger version of one of its parents, the popular annual mealycup sage (S. farinacea). It is a long bloomer, producing densely packed, deep violet-blue flowers cupped by indigo calyces from July right on through till frost. In August, you can expect the flower spikes to stretch and loop to two feet high atop four- to six-foot-tall plants.

I love the informality and natural look of this salvia, native to Brazil, Uruguay, and Argentina. Without staking, the plant's willowy thin stems and foliage will dip, bend, and loop through the garden. If supported upright it will reach five feet in height. Clear sky-blue flowers flushed with a bit of white appear from late July to frost. Unlike most other salvias, this one tolerates wet soils and partial shade and is a great candidate for meadows and naturalistic gardens.

A regal hybrid of S. guaranitica and S. gesneriiflora, this salvia blooms with large, true purple (not violet-blue!) flowers along robust four- to five-foot-high stems from August until frost. Its large, mint-green leaves produce a look and texture similar to S. guaranitica. Its tall, leggy stature can lead to stem breakage if the plant is not staked or supported by other bushy perennials.

This relatively new salvia was selected by Betsy Clebsch, salvia guru and author of A Book of Salvias (Timber Press, 1997). Growing five feet tall, it resembles S. x 'Purple Majesty'. But in our trials it had a more elegant, upright habit and less stem breakage than the latter. Also, its flowers were a bit more slender and its leaves a deeper green.

Bob Hyland is a former VP of Horticulture and Operations at Brooklyn Botanic Garden. He currently co-owns Loomis Creek Nursery in Hudson, New York, which specializes in out-of-the-ordinary perennials, tender perennials, and annuals.

What’s Wrong with My Monstera? ›