The Best Care for Healthy Trees

Trees are generally able to defend themselves to some extent at every stage of their lives. They produce many types of chemical compounds as protection against harmful fungi, herbivores, and even other plants. These compounds can be found in most parts of the tree, and some can even be emitted into the air (think of the smell of pines or eucalyptus trees). Some trees may put as much as 15 percent of their energy resources toward chemical defenses, which helps explain why stressed trees, whose energy resources are depleted, are more prone to attack and damage.

Since healthy trees are much better at fending off a pest or disease attack than stressed trees, your best approach is to create a tree-friendly environment and be vigilant:

In addition, try to monitor your trees' health by looking for signs of pests or diseases and other changes and abnormalities, such as stem or twig dieback, excessive deadwood, wilting, discoloration of leaves, early fall color, and early leaf drop. Periodically check for spots or feeding damage on the leaves and for fungal growth on the trunk, branches, or leaves. Take note of loose or dropped bark, suckering at the base of the tree, or water sprouts on the branches.

If a problem is identified early, a tree can most likely be treated using nontoxic methods. Local public gardens and state cooperative extension services are great resources. They will help you identify insects and plant diseases and keep you updated on invasive pests that may be heading toward your area.

Many landscape and tree services offer maintenance packages that can do the work for you. Promoting a holistic approach to tree care, integrated pest management (IPM) and preventive health care (PHC) have emerged as industry standards in recent years. Integrated pest management entails identifying pests and managing them with the least invasive strategy possible. Preventive health care is aimed at keeping trees strong and healthy so that they will be better able to defend themselves if there is an infestation. A PHC company will visit your property up to several times a month in the growing season to survey plants for insects and diseases and other problems.

Volcano mulching (shown above) is a bad practice that is regrettably widespread. Apply mulch just a few inches deep and keep it well away from the trunk.
(Photo by Christopher Roddick)

Amending the soil with compost is an age-old gardening practice that helps enrich the soil with organic matter teeming with beneficial organisms. As the compost blends into the soil, bacteria, fungi, protozoa, and beneficial nematodes multiply and spread into the surrounding soil. The movement of the organisms opens up the pore spaces, improving aeration and alleviating compaction over time. The microorganisms also increase the amount of nutrients available to plants.

While compost is a wonderful soil amendment for trees, it cannot be worked into the soil without damaging the roots of established trees. That's where compost tea comes in. Compost tea is made by steeping finished compost for a number of days in water, then spraying plant foliage with the nutrient-rich water or drenching the soil around plants. Some commercially available compost-brewing kits have an aeration system that adds air into the water as the tea steeps, which keeps it from going anaerobic (or smelly). When you are making compost tea at home, mix one gallon of brewed compost tea with 10 to 15 gallons of water and drench the root zones of your trees. You can also customize the tea by adding nutrient-rich materials such as sea kelp, humus, or even molasses to help feed and build up microorganisms. Another option is hiring a professional arborist who specializes in compost tea and soil care, a relatively recent field of study. The arborist will examine the soil biology and then custom-brew a tea formulated for your soil's needs. No matter how sophisticated your approach, I find that compost tea is an excellent and environmentally sound way to improve the quality of landscape soil and boost the long-term health of your trees.

Trees inadequately cared for during spring and summer droughts or before potentially lethal winter storms may fall victim to extreme weather. To help trees through drought, irrigation is key. If your area experiences two to three weeks with little or no rain, consider supplemental watering, even for mature trees. Place a sprinkler or a hose at the base of these trees for two hours or so once a week during a drought. Be sure to set your watering equipment up in such a way that the stream of water doesn't wash away mulch and soil, exposing roots. It's even more important to water younger trees because they have a less developed root system. Signs that a tree needs water include wilting or browning of leaves, and most drastically, premature leaf fall. Watering is especially important if the dry spell occurs toward the end of the growing season, when trees are entering their dormant period. If plants don't take up enough water during the growing season, the new growth that they have put on can dry out and die during the winter. This "tip dieback" will be visible the following spring, and it can be fatal for a tree.

Proper pruning will help trees survive winter storms, which can coat them with a heavy layer of snow or ice. In areas where heavy snowfall and ice storms are common, prop up the lower branches of trees and knock the snow off branches after heavy snowfalls. Stay away from trees that are heavily coated with ice—the weight of the ice may bring limbs crashing down.

Protecting Trees Against Pests and Diseases 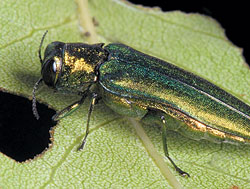 A recently introduced pest, the emerald ash borer is wreaking havoc on ash trees in the Midwest. Above is the adult beetle, which is only about half an inch long. (Photo: USDA APHIS Archives, USDA APHIS, www.insectimages.org)

As people and goods move freely around the globe, pests and pathogens are hitching rides and moving into new areas. This is true for pests and pathogens that infect us, like West Nile virus, hepatitis, and SARS, and also applies to major tree pests and diseases. Recently introduced by accident in shipping materials and the like, insects such as Asian longhorned beetle, emerald ash borer, and hemlock woolly adelgid have already killed millions of trees and threaten many more. The gypsy moth has been devastating North American forests for over a century and shows little sign of slowing down. Entomologists aren't the only ones keeping busy though; plant pathologists are also seeing a host of new diseases. George Hudler of Cornell University recently identified a microbe that has been killing European beech trees in the Northeast for the past 30 years. Sudden oak death is claiming the lives of landscape and forest trees in large numbers in California. Meanwhile, other pathogens that have been causing devastation for decades, like those responsible for Dutch elm disease and chestnut blight, have steadily spread westward to infect trees in new territories. 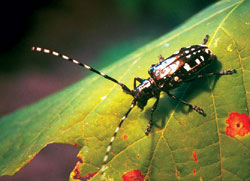 The one-inch-long Asian longhorned beetle is threatening many deciduous tree species in the Northeast. To contain the spread of the beetle, affected trees and susceptible host trees in the vicinity are being removed. (Photo: USDA APHIS Archives, USDA APHIS, www.insectimages.org)

Ultimately, there may be little gardeners can do to save trees from infestation. Some pests, such as the emerald ash borer, currently attacking ash trees in the Midwest, seem to move too quickly to be contained. In cases like this, drastic measures must be taken: A tree found to be infested with the pest is automatically removed by order of the U.S. Department of Agriculture. The wood is chipped and then burned. Furthermore, other ash trees nearby may also be removed to control the insects' movement. While it is sad to lose a tree, at this time removal is the only known control for some pests.

To contain the spread of Asian longhorned beetle, insecticides have been used as a preventative. Many arborists believe that repeated treatment with the injectable insecticide may actually do more harm than good to healthy trees by damaging their vascular system. The rapid spread of some pests and pathogens leaves little time to answer such important questions before control measures must be taken.

Many deadly insects and diseases are pretty resilient and are probably here to stay. Over time, nature itself will more than likely play the biggest role in controlling outbreaks and finding a dynamic equilibrium between the pest and its host.

This article orginally appeared in The Tree Care Primer.

Christopher Roddick is an ISA-certified arborist at BBG. He is also the coauthor of the BBG handbook The Tree Care Primer, a BBG All-Region Guide.

Make a Simple, Subirrigated, Self-Watering Planter Out of a Milk Carton ›

Autumn Leaves:  Should You Collect Them or Leave Them in Place? ›