Learn to Create an Indoor Orangerie

If you have ever wondered if you could grow citrus but live in a climate more suitable for apples, you are in very good company. Throughout history, people have endeavored to grow citrus indoors. The Romans grew lemons in greenhouses with mica windows. France's King Louis XIV was so smitten with the scent of orange blossoms that he had the first orangerie built and demanded that his gardeners have orange trees in bloom at all times. (They did, and I'll explain how later.)

In fact, the modern greenhouse owes its existence in large part to the orange. In the 18th century, as the British Empire grew, travelers who had acquired a taste of the subtropics began to build glasshouses just to grow citrus. The plants succeed well indoors if given good care. But it's important to know which varieties thrive in a relatively small indoor environment and why.

Can't I Just Plant A Seed?

Many people have wondered if they could grow a citrus tree from the seeds found inside tangerines, oranges, and grapefruit, and the simple answer is that you can. Citrus often come true to seed, and the seeds, if fresh, are easy to germinate. But you probably won't want to do this for a number of reasons. First, seedling citrus have a long juvenile period—often seven years or more—before they begin to flower and set fruit. Second, seedling trees often are very spiny. Citrus spines can be two or more inches long, which can present a hazard in your home. Finally, seedling trees are often spindly and leggy and grow taller than is practical in an indoor environment.

Most citrus grown for home use are dwarf varieties that are either cutting-grown or grafted on a dwarfing rootstock such as the trifoliate orange (Poncirus trifoliata), a citrus relative. By using cuttings or grafts from mature trees, the grower produces a plant that is ready to begin fruiting right away. Grafting on dwarfing rootstock keeps the plant small, but the good news is that the fruit is not dwarfed. A dwarf 'Navel' orange produces fruit every bit as large and tasty as a standard tree, though not in the same quantity.

When choosing a variety, try to pick one that performs well indoors and for which the grower can provide reliable information. You should know if the variety has been grafted, because if the scion (top) dies, the undesirable rootstock will take over and the tree will be useless. If the grower does not know whether the plant has been grafted, look at the trunk of the tree about six inches above the surface of the soil. If there is a swollen area above which the trunk bends away toward the soil at a slight angle, the plant has been grafted.

Citrus can be broken down into two basic categories, sweet and acid. Sweet citrus such as oranges and tangerines need abundant heat to ripen fully, which is why they are difficult to grow in cooler climate areas that would seem perfect for citrus, such as San Francisco. So much heat is required for grapefruit to ripen, for example, that in cooler parts of California the fruit must stay on the tree for more than 18 months.

Sweet citrus will therefore be difficult to grow successfully at home. However, it can be done, especially if you are able to take the tree outside for the summer months. You will also need to be very patient.

Much easier to grow indoors are the acid citrus such as lemons and limes. Some citrus such as the Calamondin do so well indoors that they seem to prefer this environment. Acid citrus will ripen fruit much faster and will tend to be nearly ever-blooming.

Don't be surprised if your citrus sheds a lot of immature fruit after blooming. Like many fruits, citrus produce many more fruits than the plants can support. So there is nothing much to worry about if your plant drops surplus fruit, provided it is otherwise healthy.

While commercial citrus are grown in full sun for maximum fruiting, it is surprising how little light citrus will tolerate outdoors. Outside, they need only about four hours of sun for good growth and fruiting. Indoors, however, citrus will need more abundant light than many homes can provide, particularly during the growing season.

During the winter citrus can tolerate low levels of light as long as they are kept fairly dry. They will go dormant if kept dry and at temperatures around 55°F., though fruit will still ripen. In fact, Louis XIV's gardeners used an extreme form of this method to keep the monarch happy. By starving citrus to the point of defoliation and then applying water, they would trick the orange trees into bursting into bloom year-round.

Citrus are subtropical plants, and grow more or less all the time in subtropical regions. Most grow in flushes followed by periods of several weeks in which the plants rest. Most indoor environments are warm enough to keep citrus growing nearly all the time, except during the coldest and darkest winter months. With many varieties—especially acid citrus—it is not unusual for the plant to bear three or four crops a year.

During the growing season citrus appreciate water and humidity, though they are surprisingly tolerant of neglect—to a point. Fortunately, drought stress shows up fairly quickly on these plants and is easily remedied. However, citrus cannot stand overwatering, and if the soil is continuously wet the plants will succumb to root rot. Water citrus as you would other houseplants, letting the soil get a little dry on top before watering again. The best thing to do is to keep the humidity level high around the plant by regularly misting the leaves.

Citrus respond quickly to fertilizer, and any nutrient deficiencies show up quickly. Fortunately, applying a liquid 20-20-20 fertilizer at half-strength during the growing season will keep your citrus plant happy.

The good news for indoor citrus enthusiasts is that there are few pests that attack citrus indoors, and that combatting those that do is directly related to the health of the plant. Spider mites are one of the worst pests. They love plants that are dry and under-fertilized, so you can keep them away by keeping your citrus well watered and well fed. Scales are another citrus pest.

There are more troubling pests, but their occurrence in indoor citrus is rare. The Asian leaf miner is a small creature that burrows into the undersides of leaves, making them twisted and deformed. Oil spray will kill miners but you will also want to remove and (preferably) burn infected leaves. Aphids can occasionally infest citrus. They cluster near new growth and suck plant juices—particularly from emerging leaves and stems. Again, an oil spray or wash will usually control these pests. 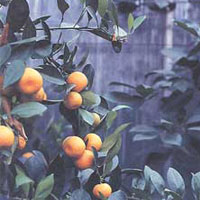 Limequat Citrus aurantiifolia x Fortunella crassifolia—This plant is a cross between a Key lime and a kumquat. The fruit is about the size of an egg and a beautiful clear yellow. These plants also are relatively cold-hardy, able to stand temperatures in the mid-20s F. without damage.

Mandarin orange Citrus reticulata 'Blanco'—This "orange" isn't really an orange at all but a mandarin. Like other mandarins it requires far less heat to ripen than true oranges, and the fruit on a Mandarin orange is deliciously sweet.

Meiwa kumquat Fortunella crassifolia—Much different from the oblong and tart kumquats commonly found at the market, Meiwa kumquats are round and sweet, perfect for fresh eating.

Meyer lemon Citrus meyeri—This lemon is perfectly suited for container culture and will bear heavily with a minimum of effort on your part. The lemons are deep yellow with a good flavor, though a little sweet.

Oroblanco grapefruit Citrus paradisi x C. maxima—Though not particularly sweet, grapefruit does require lots of heat to ripen. Oroblanco is a cross between a grapefruit and a pomelo, which doesn't require as much heat to become sweet.

Tom McClendon is president of the Southeastern Palm and Exotic Plant Society and an avid grower of palms, citrus, and other subtropical plants.

Make a Simple, Subirrigated, Self-Watering Planter Out of a Milk Carton ›

The Wonderful World of Calatheas ›