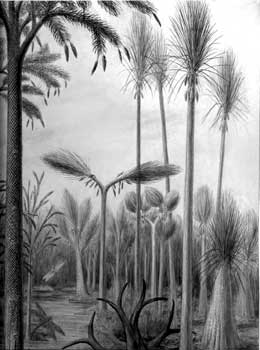 Tree-size mosses of the carboniferous era

As we see daily proof, fossil fuels make the world go round. For the past century, and especially the past 50 years, they've created vast fortunes for individuals and entire nations, powered the global economy, and provoked geopolitical tensions and sometimes wars. No news there. But did you know that current events on this petroleum-addled planet are closely linked to weird and wonderful plants that lived hundreds of millions of years ago? Recent international developments propelled me to do some paleobotanical detective work.

Many people think that fossil fuels—oil, coal, and natural gas—come from the bodies of dinosaurs that ruled the earth during the mid to late Mesozoic era, 213 to 65 million years ago. Not so. The origin of oil is still a matter of scientific controversy. However, it is generally believed that the world's great oil deposits were formed from diatoms. These tiny, mostly single-celled, photosynthetic organisms were, and still are, extremely important components of phytoplankton, the basis of the food chain for all marine and freshwater animals. When viewed with a microscope, they look like little jewels in a splendid variety of forms—round, triangular, fan- and barrel-shaped, twisted like rotini pasta—and in brilliant shades of emerald and peridot. Ancient diatoms eventually became not only petroleum but also diatomaceous earth, the nontoxic pest control so popular with modern-day organic gardeners.

An estimated 5,600 species of diatoms are alive today, and many more species have gone extinct; scientists surmise that at least 40,000 species have been around at one time or another since life began on this planet, about 3.5 billion years ago. The diatoms that became the crude oil so coveted today lived during the Jurassic period, 213 to 144 million years ago, the age when Stegosaurus, Apastosaurus (better known as Brontosaurus), and other giant reptiles dominated the earth's terrestrial environments. The diatoms were deposited on the beds of inland seas, lagoons, lakes, and river deltas, then transformed into liquid gold by forces like high temperature and geologic pressure. The origin of natural gas, like that of oil, is not entirely clear. The leading theory is that it also came from ages-old diatoms, but under different degrees of heat and pressure.

A slightly different alchemy resulted in the planet's vast coal deposits, many of them in the United States. But the plants that produced them were a lot bigger, and even more bizarre and beautiful than diatoms.

Coal formed from the dead remains of magnificent trees, ferns, and other primitive plants that lived in lush swamp forests during the Carboniferous period, 360 to 286 million years ago, long before a single dinosaur roamed the land. Back then, the various continents we know today were positioned very differently. For most of the period, Laurentia (ancient North America) and Baltica (ancient Europe) were pretty much a single landmass located near the equator. The climate was warm and humid year-round—in other words, perfect for the proliferation of plant life, especially pteridophytes, or plants that reproduce by spores.

Not surprisingly, under such ideal conditions, size was a major factor in the evolution of Carboniferous plants. Some plants reacted to competitive pressures by becoming taller, while others adapted to life beneath these giants. Great swamp forests grew in lowland areas, dominated by gigantic arborescent plants that were very different from the flowering trees and conifers found in today's tropical, temperate, and boreal forests.

The most imposing plants in these wet forests were colossal lycopods, the ancient relatives of modern club mosses such as Lycopodium, which today generally grow just a few inches tall. The tree-sized lycopods of the Carboniferous soared to 130 feet tall. These were truly primitive-looking creatures. The evidence suggests that the largest lycopods had a main trunk with a shaggy crown of dichotomous, or occasionally bifurcating, branches. Their leaves were long and grasslike, and their reproductive structures were spore-bearing cones. Their trunks contained very little secondary wood; instead, the plants were supported by a thick, barklike periderm that enclosed soft, spongy tissue. Without enough water to keep the internal cells fully expanded, the plants would have collapsed under their own weight. As the climate of Euramerica began to change toward the end of the Carboniferous, the swamplands began to dry up, and the large lycopods disappeared, in geological terms, almost overnight.

Second in height only to the great lycopods was another group of pteridophytes, magnificent tree ferns. Growing to 65 feet tall, with large, compound fronds, these were even more impressive than their descendants, the cyatheas and dicksonias, tree ferns that survive today. Unlike the lycopods, ferns diversified and increased in numbers when the Carboniferous came to a close. In fact, they apparently were so abundant in at least some later Jurassic floras that they might well have been the dominant herbaceous plants on land—imagine a brontosaur straining its enormous neck to graze on the tasty frond of a 60-foot-tall fern. Today, ferns continue to flourish, numbering just over 10,000 species worldwide.

Tremendous horsetails were another important spore-bearing component of Carboniferous plant communities. Called calamites, they resembled gigantic versions of modern-day Equisetum and often grew in dense clumps like bamboos. Unlike today's horsetails, which top out at 3 to 6 feet, the calamites reached a height of about 50 feet. Like modern horsetails, however, they consisted of a branched aerial portion growing from an underground rhizome, and both their leaves and branches grew in circles at nodes along the stems. (Some artists' renditions look a little like chubby asparagus spears cloaked with whorls of branches cloaked in turn with whorls of lance-shaped leaves.) According to paleobotanists, even the stems were remarkably similar to those of still-existing horsetails, except that they had some secondary xylem, or vascular tissue, that accounted for the plants' considerable height and girth. Calamite spores were contained, like those of the giant club mosses, in cones. Calamites made it through the climatic transitions at the end of the Carboniferous, but subsequently declined. Today, horsetails exist as a single genus, Equisetum, consisting of about 20 species distributed around the globe.

Carboniferous swamps also provided habitat for two groups of early seed plants. Many Cordaites, odd-looking early conifers with long, straplike leaves, were tall (50 to 100 feet), highly branched trees that formed extensive forests. Their leaves, up to three feet long, were arranged spirally at the tips of the youngest branches. The Cordaites produced male pollen-bearing cones and female seed-bearing conelike structures on separate branches. The other large group of primitive seed-bearing plants were the "seed ferns." They had large, pinnately compound fronds so fernlike that they were long regarded as ferns. However, instead of reproducing via spores as true ferns do, they produced walnut-size seeds directly on the foliage. Some were tall, woody trees. Both the Cordaites and the seed ferns eventually disappeared, although more advanced seed-bearing plants were soon to take over the world.

Herbaceous lycopods, herbaceous trailing and scrambling horsetails, small, shrubby, or scrambling seed ferns, and a variety of small and medium-size true ferns covered the floor of Carboniferous forests. Stalking these ancient swamps were early reptiles, cockroaches as big as house cats, and dragonflies with the wingspans of modern hawks.

Many of the plants and animals of the Carboniferous swamps were dependent on abundant supplies of water. In order for spore-bearing plants to reproduce, the sperm cells must swim through water on plant surfaces to reach the eggs. When tropical areas became drier and huge glaciers began to cool temperate as well as polar areas during the succeeding period, the Permian, most of the plants that flourished in the great swamp forests became extinct. Conifers, cycads, and other seed-bearing plants were better adapted to the drier conditions that came to dominate the next great era of life on earth, the Mesozoic. Yet even today, at the dawn of the 21st century, we continue to grapple with the legacy of diatoms and pteridophytes of eons past.