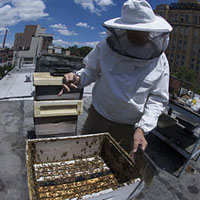 Brooklyn beekeeper John Howe inspecting one of his rooftop hives. Find out where you can buy John's honey at brooklynbee.com. Photo courtesy John Howe.

Last August, I visited a beehive in Brooklyn’s Greenpoint neighborhood, on the roof of a three-story building nestled between two thoroughfares. Having had some unpleasant incidents with wasps in my childhood, I was a bit apprehensive. But when I saw the hive, my worries were quickly replaced by wonder and curiosity. It was the first day of sunshine we’d had in a week, and “the girls” were taking full advantage of the change in weather. Worker bees zipped to and fro, while guard bees patrolled the area around the hive. A stray worker found her way onto my black T-shirt but thankfully didn’t employ her stinger. (In the past, beekeepers avoided wearing dark-colored fabrics when working a hive, but some experts now say that defensive bees will only target areas of contrasting color—borders of light and dark—because they resemble the eye patterns of natural enemies, such as bears and raccoons.)

After lighting a smoker, the beekeeper—who’ll remain anonymous for reasons explained below—started to pull frames from the hive, checking honey production and colony health. Despite the preceding days of rain, there was a great store of honey, and much of the comb was already capped, that is, sealed off with beeswax. We returned the frames to the super—the outer part of the hive that holds the frames—and put the cover back on the hive, though not before I managed to get stung by a worker bee investigating my face. The sting swelled for a few hours afterward, but the pain was minor and did nothing to spoil the sense of exhilaration I felt about the visit.

Urban beekeeping is on the rise in the U.S., powered by such trends as the local food movement (what could be more local than honey produced from the plants in your own garden and surrounding environs?) and the spread of inner-city community gardens. A general yearning among city folks to reconnect with nature may also be a contributing factor. (A recent New York Times article revealed that participants in Facebook’s real-time simulation game Farmville outnumber actual American farmers by 60 to 1.)

Many urban centers—including Chicago, Dallas, Detroit, and Portland—have embraced the idea of honey farming, but at least for the time being, it’s illegal in New York (hence the caution about revealing the beekeeper’s identity) and punishable by a fine of $2,000. As of press time, Section 161.01 of the New York City Health Code categorizes honey bees (Apis species) as “dangerous animals, naturally inclined to do harm or capable of inflicting harm.”

Opponents of the ban disagree, arguing that domesticated honey bees are docile, nonaggressive creatures, concerned primarily with bobbing from flower to flower collecting nectar, and that they only become defensive if their hives are directly threatened. They also argue that any potential risk is far outweighed by the economic and ecological benefits bees can provide to urban habitats through plant pollination and honey production, not to mention increased opportunities for environmental education.

And it looks as if the tide may be turning in their favor. Following a petition submitted by the nonprofit sustainable-food advocacy group Just Food, as well as a bill to lift the bee ban introduced by city councilman David Yassky, the NYC Department of Health is set to review its policy toward bees in spring 2010. Soon, beehives may become a common sight on rooftops and in gardens of the Big Apple. For now, however, beekeepers in New York City must continue to tend their hives in secret. Or at least try. In a six-month period last year, the health department received 49 complaints about beekeeping, held 9 investigations, and issued 4 summonses. Clearly, a program of public education about the benevolence of bees will need to accompany any new legislation.

A Hive of One’s Own

Are you a city slicker yearning to commune with mother bee? If so, check with your state apiarist to see if bee farming is legal in your area. (It is allowed in just about every city except New York.) A full list of apiarists is available on the website of the magazine Bee Culture. In hope and anticipation that the New York City ban will be lifted—and for anyone living in a bee-friendly city—following are some very basic instructions for starting and maintaining a colony of your own.

First, you’ll need a hive to house your bees. Online dealers such as betterbee.com sell them as part of start-up beekeeping kits. Local honey co-ops and beekeeping organizations also often sell hives. And you may also find them through beekeeping courses, taught privately or through a college or Cooperative Extension. In New York City, the Gotham City Honey Co-Op offers classes for “wannabees” every Sunday in Central Park and provides tips on hive purchasing. For the do-it-yourselfers out there, most state universities will mail you hive plans and other equipment free of charge.

The gold standard of American beehives is the Langstroth hive, invented in 1851. It’s designed so that the frames that hold the honeycombs are removable and spaced widely enough so that the bees can’t cement them together or to the walls of the hive, hindering honey extraction. From top to bottom, the Langstroth hive consists of a telescoping cover (or lid), an inner cover, supers (individual boxes that hold the frames), and a bottom board. It’s important to keep the bottom board dry, which you can do by setting the hive on cinder blocks or bricks. When purchasing your hive, make sure it complies with standard measurements so that parts can be easily replaced or interchanged. Because your hive will be exposed to the elements, it’s a good idea to paint the supers and treat the bottom board with a wood preservative.

In addition to the hive, you’ll need a smoker—a kettle with attached bellows used to smoke the hive. Smoke masks the bees’ alarm pheromone, making them more docile and inspection-friendly. You’ll also want a hive tool, a flat metal scraper used for cleaning up propolis, a resinous material that bees use to seal the hive, and burr comb, a loose comb they build outside the frames.

Once you have the housing, you’ll want some tenants. Many apiaries sell nucs (starter, or nuclear, hives generally consisting of five frames, lots of bees, and a queen) online or through local bee organizations. Don’t worry about transportation—U.S. postal code dictates that queens can be delivered by mail. To install the nuc, just transfer the frames to your empty hive. Early spring is usually the best time of year to start a hive. The breed of bee is up to you, though species that are quick to swarm (like Russian bees) are not recommended for beginners. The Italian honey bee Apis mellifera ligustica is the most popular subspecies among U.S. apiarists, and it winters well in New England.

Though many experienced beekeepers forgo the mesh suits and veil, you may want to start out using protective gear. You’ll find numerous online sources. Avoid loose, textured clothing with starkly contrasting colors, and don’t wear scented hair products or perfumes. Remove watches and other jewelry that might create border zones of dark and light. If you do get stung, scrape rather than pull out the stinger.

In general, it’s best for the hive to face south or east, so the bees get the morning sun. Hive location is also important for minimizing the risk of a stinging incident. Situate your hive so that the bees’ flight paths don’t intersect with human rights of way. In cities with lots of low dwellings and backyards, it might be necessary to put up a fence by the hive so that bees, which tend to fly in a straight path, or “bee line,” start their forays at a greater height. Such fences are required by law in Minneapolis, for example. For a New York City rooftop hive, such measures are usually unnecessary.

When setting up a hive, it’s also important to provide a nearby water source so the bees aren’t raiding the neighbor’s birdbath. Periodically check on them for honey flow, brood health, diseases, and extra queen cells, which can lead to swarming (a reproductive process in which the queen—having produced a brood of virgin queens—leaves the hive to start a new one, taking over half the bees with her). Become familiar with local weather patterns and the nectar flow of your local fauna, both of which determine the rate of honey production.

Honey can be harvested multiple times from a well-managed hive from early summer to fall. Extraction of honey from the frames is best done in a warm, dry room away from the attention of your bees. You can uncap the wax from the honeycombs using a serrated kitchen knife, but it’s more efficient to use a special extractor (basically a tank with a centrifuge that “spins” three or more frames at a time) to separate the liquid honey from the comb. Since extractors are only needed one or two days each year, hobby beekeepers usually share this equipment among themselves.

In cold climates, it may be necessary to insulate your hive with black plastic wrapping during the winter months to moderate temperature swings. Also, choose an overwintering location for the hive that is sunny but also protected from the prevailing winds.

Connecting with Your Community

When starting out as a beekeeper, it’s a good idea to connect with other local apiarists. No book will ever be as helpful as a mentor, and most beekeepers are very generous in sharing their knowledge. If you’re interested in beekeeping but don’t have time to shepherd a colony, you can always “adopt”—that is, provide space in your garden or on your rooftop for an experienced beekeeper’s hive.

Don’t forget to take the larger community into consideration. Take steps to educate and reassure your neighbors about your hobby. At the hive I visited in Greenpoint, the nearby human residents loved the bees not only for their honey and entertainment value but also because the extra pollination brought better yields in their own backyard gardens. And of course, a bit of honey can go a long way toward assuaging a reluctant neighbor!

Jent LaPalm is a Brooklyn-based musician, writer, and bee enthusiast.