Viburnums have long been popular garden plants, celebrated for their white, often fragrant spring flowers and their fall color. But it's the Asian viburnums that have so far ruled the roost. Perhaps the most widely appreciated viburnums are the Burkwood viburnum (Viburnum x burkwoodii), and the Korean spice viburnum (V. carlesii), both of which fill the air with an enchanting clovelike aroma in mid-spring. Also popular is the doublefile viburnum (V. plicatum f. tomentosum), valued for its layered habit, fall foliage, and clusters of red fruits. 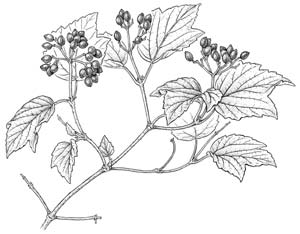 Although I wouldn't garden without any of these, I have a special fondness for several of our very gardenworthy native viburnums. They may not provide the enticing flower fragrance of their Asian cousins, but I love them nonetheless—not only for their marvelous fall foliage color but also for their copious fruit displays, which attract wildlife to my garden in the fall and winter months. In addition, several are useful to today's waterwise gardeners or for tough urban conditions. They require only corrective pruning, and none commonly suffer from pests or diseases.

My favorite native is the swamp-haw viburnum, Viburnum nudum, which thrives in the wild along stream banks from Long Island to Florida. It performs equally well under normal garden conditions in full sun to partial shade. The plant has lustrous, shiny green leaves and a dense, uniform, domed shape. Growing up to seven feet high and hardy from USDA Zones 5 to 9, it offers the expected white viburnum flowers in late June. But these flowers are followed by clusters of round drupes that progress through a series of color changes as they ripen. They start out green, then become white, then blushing pink, and finally bluish black. By late summer, it is not unusual to find this shrub decorated with clusters of multicolored fruits. The fruits look particularly attractive alongside the plant's red to reddish-purple fall foliage. Though I admire the straight species, I love the cultivar 'Winterthur', which has brighter red leaves and more abundant fruit. However, since the cultivar is probably self-sterile, it is wise to plant another V. nudum to act as a pollinator and ensure a dazzling display.

The southern arrowwood viburnum, Viburnum dentatum, is a plant I regard highly for its ability to adapt to a tremendous variety of cultural conditions. Native from New Brunswick to Florida and Texas, it is a fast-growing viburnum with a more suckering habit than V. nudum. Its long, straight stems were once used by Native Americans to make arrows, hence the common name. Hardy from Zones 3 to 8, it is a good plant throughout the season because of its creamy spring blossoms, its light green coarsely toothed leaves, and its deep blue fall fruits. The fall foliage is yellow to red to reddish purple. Though in the wild the arrowwood viburnum grows in woodlands, bogs, and along stream banks, it adapts easily to many soil types in full sun to partial shade. It is even tolerant of alkaline soil. Growing from 6 to 12 feet high, this tough shrub can be used as the backbone of a screen or unclipped hedge against which more ornamental shrubs can be featured. It can be naturalized or placed in moist locations where other shrubs would struggle.

I always look for ecological benefits when adding plants to my garden, and the arrowwood viburnum has lots of them. It is a larval food plant for the spring azure butterfly and several moths. Its fruit is eaten by the phoebe, mockingbird, robin, brown thrasher, northern flicker, cardinal, cedar waxwing, vireo, bluebird, and grosbeak. The plant is also used by several bird species for cover and nesting. Cultivars include 'Morton', which has a broad, upright, rounded form and burgundy foliage in fall. 'Blue Muffin' has rich blue fruit and is very compact, growing from three to five feet tall; it's a good choice for a low hedge, foundation, or container planting.

Long known as Viburnum alnifolium, the hobblebush is now called Viburnum lantanoides. It is a disheveled shrub found in forest understory, ravines, coves, and stream banks from New Brunswick and Michigan to the North Carolina mountains. Though not quite suitable for the formal garden, it has many virtues in a more natural setting. It grows from 6 to 12 feet high, and its pendulous outer branches root wherever they touch the ground. In the shady, moist woodland conditions that it prefers, it can "march" down a slope. One must assume its common name came from a tendency to grow across horse paths. The white, flat-topped flowers are very showy in May and develop into clusters of red fruit that eventually turn purple-black. This fruit is a preferred food of ruffed grouse, brown thrashers, cedar waxwings, squirrels, and chipmunks. I like the leaves, which are huge and fuzzy and develop early fall color, often in later summer. They turn reddish to deep claret, sometimes rose-gold, green-gold to pinkish purple.

There is even a native viburnum that will form open colonies in the dry shade beneath large deciduous trees. The maple-leafed viburnum, Viburnum acerifolium, is found in woodlands from New Brunswick to Minnesota and south to North Carolina and has foliage that resembles our native red maple. Since it is not aggressive and doesn't cast a great deal of shade, V. acerifolium mixes well with most herbaceous wildflowers and ferns. It grows up to six feet tall and is hardy from Zones 4 to 8. In late May, the plant produces flat-topped clusters of creamy white flowers that ripen into persistent black fruits. However, fall foliage color is probably this species' most ornamental character. In autumn, sweeps of this charming native give a pink watercolor wash to the forest floor. It is a larval food source for the spring azure butterfly and a nectar source for the golden-banded skipper. Flickers, robins, bluebirds, cedar waxwings, wild turkeys, cardinals, flycatchers, thrashers, thrushes, woodpeckers, and game birds relish the fruit.

Another native viburnum that draws the same song and game birds with its prolific fruiting is the American cranberry bush, Viburnum trilobum (also called Viburnum opulus var. americanum). Since the bright red drupes often persist through winter, they make a meal for spring migrants as well. The fruits (not cranberries) are safe for human consumption and are most often used for making jelly. V. trilobum is an outstanding plant for screening and hedging because it can grow up to 12 feet high, and it offers not only privacy but flowers, fruit, and nice foliage. The fall color is a deep burgundy-red. The plant is found in the wild from New Brunswick to British Columbia and south to New York, Michigan, South Dakota, and Oregon—no surprise, then, that it is not well adapted to heat south of Zone 7. Several cultivars are available, including 'Phillips', a dwarf selection with good-tasting fruit, and 'Redwing', which has red-tinted new foliage and red to wine-red fall color.

The black-haw viburnum, Viburnum prunifolium, has the stature of a small tree and is found in the woods from Connecticut to Florida and west to Michigan and Texas. Hardy from Zones 3 to 9, it is a tough plant and a good crabapple substitute for city gardens or naturalized landscapes. I've seen it used very successfully in public plantings because it tolerates dry situations and different soil types, and will grow in sun or shade. However, it is not salt tolerant. The May-blooming flowers are white with numerous yellow stamens. The cherrylike leaves have reddish stems, and the fall foliage color is often a glistening purple-red. These features, along with a distinctive pebbled bark, make the black-haw viburnum easy to identify in the wild. The plant's black fruits are eaten by many kinds of wildlife and can be eaten out of hand or used for making jelly, though the birds usually get them first.

Richard L. Bitner, an anesthesiologist by trade, lectures on deciduous flowering plants at Longwood Gardens and is a member of the Pennsylvania Horticultural Society's Gold Medal Plant Award Committee.