Visit any of the great bonsai collections around the world, and you quickly come to understand that a large number of fabulous specimens like a cold climate. They are cold-temperate deciduous and evergreen trees native to northern lands and need a dormant period of cold and rest every year in order to lead a long and healthy life. That these temperate species should make up a great deal of the world's bonsai is not surprising, given that the art is traditionally considered an outdoor pursuit. In Japan, extremely low temperatures are rare beyond the northernmost regions, and the temperate trees popular for bonsai there live outdoors all year long. 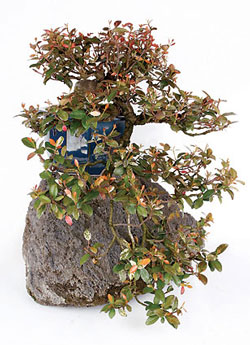 Tropical plants like Asian jasmine lend themselves to indoor bonsai. Styled as a cascade, this 23–inch‐tall specimen has been in training for 50 years.

Even though the art of bonsai has traditionally been practiced on hardy plants outdoors, since the middle of the last century, growing bonsai indoors has become increasingly popular. If you'­d like to begin cultivating bonsai in your home but are not in the market for a cool greenhouse that can accommodate cold-hardy northern trees, the tropical and subtropical bonsai found in the southern U.S., most of South and Central America, Taiwan, southern China, Southeast Asia, and India are much more promising options to start with. In their native locales, these trees are also cultivated outdoors year–round. The fortunate bonsai artists in those balmy regions do not need special techniques for cultivating and protecting their creations. The good news for cold–climate bonsai enthusiasts is that it's quite easy to emulate the growing conditions for tropical and subtropical species, plus a number of warm–temperate species, inside the average house or apartment. Whether you wish to purchase your first bonsai and learn to nurture it or shape one yourself from a nursery plant, this book can start you on the path to bonsai artistry. But beware, bonsai can become a passion.

A Few Notes on the History of Bonsai

The beginnings of the art we know as bonsai trace back almost two thousand years. Its roots are visible in depictions of floral arrangements in early Chinese art dating to circa AD 200. These early floral and garden images already indicate a blending of horticultural skill with aesthetics to evoke the spirit of nature. The 17th–century Chinese text The Mustard Seed Garden Manual of Painting, with references to floral arts dating back to 495, is still useful and popular with contemporary bonsai artists and teachers.

The Japanese word bonsai translates as "to train in a tray." The term is penjing in China, where the art form has flourished and developed into a variety of schools, including landscape bonsai, in which elaborate displays are built with trees and stones combined to create landscapes in shallow trays. The Chinese representations of mountains and water in these landscapes often include tiny structures and figures of men and animals.

During the Tang dynasty (618 to 906), delegations of Japanese officials traveled to China, beginning an extensive exchange of arts and ideas that continued for centuries. In time, the Japanese developed bonsai styles and techniques suited to their own native plants and their distinctive artistic and cultural concepts.

Initially, all the trees that became bonsai had been formed and shaped by nature. As suitable, good-quality trees became more difficult to find, the Japanese devised techniques for growing and training bonsai from young plants. By the mid–19th century, they had refined the styles and techniques for bonsai training and codified the aesthetic principles. These rules still guide modern bonsai artists.

In the United States, the first bonsai artists were Japanese immigrants who had settled on the West Coast in the late 19th and early 20th centuries. Although a few early merchant ships to China had brought trees in containers to Great Britain and North America, these early imports were essentially curiosities and did not spark the interest that occurred later, perhaps because they lacked wide exposure.

At the end of World War II, American servicemen stationed in Japan were exposed to the art of bonsai, and many brought examples back home with them. (Chinese versions of bonsai and penjing reached the West later because of political upheaval and restrictions.) Since then, and with typically American exuberance, the art of bonsai has been embraced and extended to many species of American trees, including many tropical and semitropical species.

Brooklyn Botanic Garden'­s own bonsai collection started with 32 trees in 1925 and now numbers about 350 trees, encompassing hardy as well as tropical, subtropical, and warm-temperate species. Starting with the leadership of bonsai curator Frank Okamura, who was responsible for the collection from 1947 until his retirement in 1981, Brooklyn Botanic Garden has been at the forefront of popularizing bonsai for indoors and out. Realizing that many bonsai lovers were eager to grow dwarfed potted trees in their homes, Mr. Okamura started to experiment with nontraditional species suitable for indoor cultivation in the 1950s and taught widely on the subject. This current handbook follows in the steps of two BBG classics on the topic, published in 1976 and 1990, respectively. Each has been reprinted many times.