A Wake-up Call from the Climate

A few years ago, as I was ﬂying into San Diego for a horticultural conference, I peered out the window as the airplane banked for landing. The sun had set and darkness had fallen, but I could see snaking corridors of ﬂame and huge clouds of sulfurous orange smoke billowing up from below, like a scene from Dante’s Inferno. Later that evening, scores of area residents took refuge in my hotel from the wildﬁres, along with their dogs, cats, birds, and what prized possessions they had been able to grab in the rush to evacuate their homes. 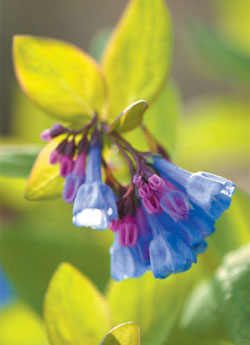 Sunlight striking the leaves of this Virginia bluebell sets photosynthesis in motion. Via photo­synthesis, plants remove carbon dioxide, the major greenhouse gas, from the atmosphere.

The San Diego blazes were part of a series of wildﬁres that burned across Southern California in October 2007, forcing approximately a million people from their homes—the largest evacuation in the state’s history. Nine people died as a direct result of the ﬁres; 85 others were injured; at least 1,500 homes were destroyed; and more than 500,000 acres of landscape were scorched. Among the key factors that contributed to the conﬂagration was an eight-year-long drought. Data show that global warming has exacerbated the region’s natural aridity, and California’s ﬁre season, which traditionally extended from June through October, has become a year-round threat.

The effects of climate change, as you’ll see in the chapter that follows, are already being felt throughout the United States and around the world. Australia, the Mediterranean region, Kenya, and Brazil as well as parts of North America are enduring epic drought. In the East and Midwest, precipitation patterns are also becoming more extreme, with longer dry spells and heavier downpours. Forests across western North America are succumbing to pests proliferating in the growing heat. Around the globe, spring is arriving earlier. All of this and more is a result of an increase in global mean surface temperature over the last century of little more than one degree Fahrenheit. The droughts, ﬁres, and ﬂoods of recent years offer a glimpse of what is in store as climate change intensiﬁes. The overwhelming majority of scientists believe that if current trends continue, things will get much worse.

At a September 2009 meeting at the United Nations in New York City, heads of state from around the world were warned by the Intergovernmental Panel on Climate Change, an international group of scientific experts, that greenhouse gas emissions are propelling the planet toward the disastrous impacts described in the panel’s worst-case scenarios.

The latest research to come out of the United Kingdom’s National Weather Service, which was presented that same month at an international climate conference convened by Oxford University, challenges the assumption that severe warming is a threat only for future generations, indicating that without strong action worldwide to curb greenhouse gas emissions, the global mean temperature could rise 7°F by 2060—a few short decades from now. However, the head of the Weather Service, Dr. Richard Betts, emphasized that it’s not too late to head off the worst effects. We do have time to avoid the “doomsday scenario,” he said, “if we cut greenhouse gas emissions soon.” In recent years, the scientific consensus has been that any more than 3.6°F of warming would cause extreme disruption to the planet’s natural ecosystems and human communities. According to Weather Service research, to avoid surpassing 3.6°F of warming, currently soaring emissions must peak and start to fall sharply within the next decade.

Gardeners, with their intimate connection to the natural world, have a unique opportunity to demonstrate how to transform concern over climate change into effective action.

In most areas of daily life, whether heating and cooling your home or commuting to work, it is possible to reduce your contribution to climate change, but it’s almost impossible, given current technology, to get to carbon neutral, with no net adverse impact on the atmosphere. However, gardeners have the potential to do more than reduce their greenhouse gas emissions! Anyone who has contemplated the process of photosynthesis knows that plants have the marvelous ability to remove carbon dioxide, the leading greenhouse gas, from the atmosphere. Using the sun’s energy, they transform CO2 and water into carbohydrates that fuel plant growth. As plants grow, carbon is stored in their living tissue and remains there over their lifetime, which in many trees can be considerable. This means it is possible to create a garden that is carbon negative—that captures more carbon than it emits in carbon dioxide and its equivalent of other greenhouse gases.

In this book, you’ll ﬁnd step-by-step instructions on how to create such a garden. In “Reducing Your Garden’s Climate Footprint,” you’ll learn about the many ways you can lower your garden’s greenhouse gas emissions—from eliminating your use of power tools, which consume fossil fuels and emit carbon dioxide, to minimizing soil cultivation and the use of fertilizers, which increase emissions of carbon dioxide, nitrous oxide, and methane, three powerful greenhouse gases. You’ll also learn how to reduce “hidden” carbon emissions that occur during the manufacture and transport of garden products. Actions like these not only make your garden go easier on the atmosphere but also result in less routine maintenance for you.

In “Turning Your Landscape Into a Carbon Sink,” you’ll discover how your garden can make the most of plants’ amazing ability to remove carbon dioxide from the atmosphere and store or “sequester” carbon in their tissues. You’ll also learn how to create another kind of horticultural carbon bank by increasing the amount of organic matter in your soil.

What’s more, you can use your garden to offset other greenhouse gas emissions. “Landscaping for Home Energy Efficiency” shows how to place trees, shrubs, and vines strategically to create shade and block blustery winter winds, reducing the amount of energy required to heat and cool your home, and therefore your overall greenhouse gas emissions. “The Climate Footprint of Homegrown Food” describes a number of ways to design and maintain a vegetable garden that minimizes emissions of climate-altering gases and sequesters as much carbon as possible.

Of course, gardening alone can’t solve the problem of global climate change. Gardeners manage very little land, so our impact on the atmosphere is small. But that doesn’t mean it’s insignificant. Understanding the scale of the challenges we will face in our own gardens can help us comprehend the wider implications of climate change for our communities, the country, and the entire planet. This, in turn, can encourage us to make not only our landscapes but also our communities more sustainable, and collectively these actions can have a major impact.

In “Beyond the Garden,” you’ll learn about a number of different ways gardeners are taking action in their communities—by planting trees, for example, and participating in citizen science projects. We gardeners have always prided ourselves on our intimate knowledge, passed down over generations, about climate, soils, and myriad other interactions that affect our plants. But traditional knowledge about ﬁrst and last frosts, likely temperatures and precipitation patterns, and the usual timing of pest outbreaks is increasingly unreliable. By participating in citizen science programs such as Project Budburst, gardeners throughout North America are helping researchers understand the effect of global warming on plants and, ultimately, us.