What’s in a Name?—A Primer on Plant Taxonomy 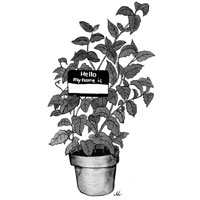 Plant names change. It's something I never considered before I started working in a botanical publications department. But it's a pervasive pitfall in writing about plants, and garden writers need to watch where they step.

Take this issue of P&G as an example. We spotlight the umbel family, which is sometimes called Umbelliferae and other times Apiaceae. Which is the correct name? Both, it turns out: This is one of eight plant families for which synonymous names are allowed.

Where Do Plant Names Come From?

Many plants received their scientific names in the mid-18th century, when Swedish naturalist Carolus Linnaeus set out to catalog all the plants then known. His flora, published as Species Plantarum in 1753, named close to 8,000 plant species and marked the beginning of modern botanic nomenclature.

Prior to Linnaeus, plant names were usually long and unwieldy Latin descriptions of a plant's character known as differentiae specificae. Linnaeus organized his flora by genus, streamlined differentiae to what he considered the most essential terms, and designated a nomen triviale, a single-word descriptor (or epithet) unique within the genus, for every single taxon of plant. Together, the genus name and epithet formed a unique, binomial species name. This simple and elegant convention of binomial nomenclature caught on rapidly and became the accepted form of naming species throughout the world.

Over the next century various natural history and scientific societies debated ways to further standardize the naming of taxa. In 1867 the Swiss botanist Alphonse de Candolle published the first international rules of botanical nomenclature, which gave rise to today's International Code of Botanical Nomenclature (ICBN), now in its 13th edition. (There are separate codes governing the naming of cultivars, animals, bacteria, and viruses, each with the goal of assigning each taxon one valid name that is accepted worldwide.)

The ICBN is not a list of plant names, but rather a clarification of the rules and recommendations by which names are assigned, with an appended list of exceptions to these rules. Every six years at an International Botanical Congress (IBC), about 300 botanists and taxonomists convene to hash out proposals for amendments to the rules and argue about plant names.

You might think of scientists as mild mannered, and those who choose to study flora as likely to be calmer than, say, nuclear physicists. But things can get pretty heated when botanists gather to talk about plants—particularly when names are at stake.

The ICBN does not name plants—that task falls to individual scientists and plant pursuers. In fact, anyone can propose a name. In order to name a newly discovered species, or rename an existing one, one simply publishes the name along with a plant description in botanical Latin, then waits for it to catch on. (There is a cottage industry of folks who translate plant descriptions into correct botanical Latin for publication.) In scientific publication, the name of the description's author is generally appended to each plant name as a citation.

When a particular species is referred to by more than one acceptable scientific name, the ICBN decrees that the earliest published name is the correct one. Linnaeus's name is therefore attached to many binomials because, again per the ICBN, Species Plantarum gave him authorship of all the names he set forth, even though in most cases he was not assigning new names but recording scholarly names that had been recognized for centuries.

Since 1930, the IBC has required that every plant name be associated with a "type"— a preserved plant specimen that embodies the character of the taxon being named and thus serves as a reference to confirm the identity of the species. The preserved type specimens are archived in herbaria around the world, where pretty much anyone who's interested can examine them.

For example, the plant that Linnaeus called Apium petroselinum, commonly known as parsley, was reclassified in 1768 as Petroselinum crispum by the British botanist Phillip Miller. Because the type requirement did not exist in 1768, a retroactive type specimen (or "lectotype") was later assigned to the species. This lectotype resides in the George Clifford Herbarium of the Natural History Museum, London, which you can visit by appointment. In fact, because Linnaeus cataloged George Clifford's collection in the 1730s, it's possible that he handled this very plant while he composed his species diagnoses.

Herbarium visitors can even dispute the identification of a type by pasting a little card onto the specimen sheet. If the herbarium's curators agree with you, they may opt to amend the specimen's descriptive label. Otherwise, your annotation will remain in place for future researchers to take into consideration. Some herbarium records have dozens of annotations pasted onto them. It's like an analog version of a collectively written wiki.

Naming a plant specimen involves a few interrelated actions. First, there's identifying what group of plants the specimen belongs to ("taxonomy"). Then there's determining the correct way to refer to that group of plants ("nomenclature"). "Plant systematics" generally comprises these two actions, but the three terms are somewhat fungible, and each seems to be used to describe both a system of classification and the act of classifying within that system.

Linnaeus and his predecessors used physical (or morphological) characteristics to group plants, and this practice held sway until the 1990s, when advances in molecular systematics made it possible to study plant relationships through genetics. In some cases genetic discoveries reinforced the suppositions made through prior examination of form and structure, but in others DNA analysis showed that plants formerly thought to be related were actually quite different. Taxa were then reclassified—and therefore renamed.

Plant names are changing at an accelerating pace, as new species discoveries and genetic information provoke new understandings of plant relationships. In many cases, plants formerly grouped under a single species are reclassified into distinct species. This recently happened with Acacia, a large genus of trees found in Australia, Africa, the Americas, and Asia that was originally described by our friend Phillip Miller in 1754. Recent genetic research identified Acacia as a polyphyletic grouping, meaning one without a recent common ancestor, prompting proposals to divide Acacia into five different genera.

Controversy sprang up over which plants would retain the genus name Acacia. Because the genus type is from one of the African species, the ICBN dictated that the name Acacia be conserved for the African species, and therefore the 956 unrelated Australian species would adopt new names under a new genus (Racosperma). (It's as if the U.S. decided there could be only one city called Portland, and Maine and Oregon had to duke it out.) However, the Australians raised strong objections, not only because of the quantity of plants affected but also because of their perception of Acacia as an iconic Australian species with historical and cultural significance. Australian botanists proposed changing the type specimen attached to the Acacia genus to a specimen from one of the Australian species. This retypification would allow the genus name to be conserved for the Australian plants while a new home would be assigned to the African group.

The ICBN Committee for Spermatophyta (seed-bearing vascular plants) and then the General Committee voted to recommend this proposal, which then was brought to the Nomenclature Section. After a heated discussion, Australia won the right to keep the name Acacia. Ironically, Australia will host the next IBC, where this change in the code might again be challenged.

By Any Other Name

In a perfect world, there would be one true and accurate name for each plant. But this isn't the case. Scientists debate systems, classifications, identities, and exceptions. Names will change at an increasing rate as molecular analysis provides new insight into plant phylogeny.

In the end, all we really need to know is that it's okay to use both Umbelliferae (Antoine Laurent de Jussieu, 1789) and Apiaceae (John Lindley, 1836) because the ICBN says so (Art. 18.6). And it really doesn't matter whether gardeners call umbels by one of these names, or the parsley family, the carrot family, or even the parsnip family. As long as they can distinguish parsley from fool's parsley!

Elizabeth Peters is the director of Digital and Print Media at BBG.