Native to South Africa, cape fuchsias (Phygelius species) will add verve to your borders with vibrant, warm-toned flowers that bloom for months in summer and fall. Their common name is misleading: though cape fuchsias produce tubular blossoms similar to those of hardy fuchsias (Fuchsia species), they're botanically unrelated. They actually belong to the Scrophulariaceae or figwort family, and so are closer in kinship to foxgloves and penstemons. In cooler climates, cape fuchsias are generally treated as tender perennials and grow from three to five feet tall and wide. However, in USDA Zones 7 and warmer, they often remain evergreen and may grow larger, taking on the appearance of medium-size shrubs.

Many garden perennials disappear completely over the winter and leave gaps in beds and borders that can easily be infiltrated by weeds. With their potential for year-round bulk and substance, cape fuchsias are invaluable for keeping out pesky interlopers. Add to that an extraordinarily long flowering season and plentiful, showy flowers in eye-catching colors, and you can see why they're considered choice plants. The funnel-shaped blossoms are attractive to hummingbirds—another reason to select as many cultivars as your garden can accommodate. And because they're midway in appearance between shrubs and perennials, cape fuchsias combine as well with shrubs in an easy-care border as they do with perennials in a more sophisticated garden design. 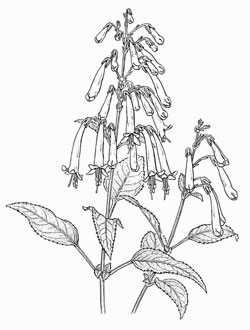 Early Phygelius selections were limited to yellow and red hues, but now peach, pink, and even magenta flowers are yours to enjoy. The blossoms are arranged in clusters at the top of sturdy flowering stems that rise up above the bushy plants. The roughly four-inch-long leaves are lance-shaped, shiny, and dark green, and they give the plant a handsome appearance before and after flowering.

There are only two wild species in the cape fuchsia genus. One is Phygelius capensis, which grows about four feet tall and two feet across and produces red flowers with yellow throats starting in July and continuing through autumn. The other is P. aequalis, rising about three feet tall and eighteen inches across, and offering coral-red flowers with yellow throats and mahogany rims starting in late June and blooming until frost. The cultivar P. aequalis 'Yellow Trumpet' was introduced in 1977 and is still popular today for its creamy-butter-yellow flowers. There are two pink cultivars of P. aequalis: 'Trewidden Pink', which has flowers the color of strawberries mixed with cream, and 'Pink Trumpet', which has soft salmon-pink flowers with yellow throats. A red form, Phygelius capensis var. coccineus, and an orange form, Phygelius capensis 'Orange Form' are recorded in the literature but rare in cultivation.

Cultivars on the Market

As a result of crosses between P. capensis and P. aequalis, there are numerous hybrid cultivars for us to enjoy. These plants are usually listed in catalogs as forms of Phygelius x rectus. The closest to pure red is 'Devil's Tears', which has dark red buds that open to red flowers with butter-yellow throats and give the overall impression of red-orange. 'African Queen' has a deep salmon tint, while 'Salmon Leap' is a paler apricot. 'Winchester Fanfare' blends pink, red, and orange into a color that seems to glow. 'Moonraker' is similar to 'Yellow Trumpet', with light yellow flowers that show up well against the dark green foliage—both are especially luminous in partial shade. Unabashedly brilliant, 'Sunburst' has chartreuse leaves and pink flowers that arrive in July. Light shade is recommended for the best display of its lime-colored leaves.

Three pink cultivars round out the palette. 'Pink Sensation' flaunts rich magenta-pink flowers. 'Pink Elf', a two-footer with creamy coral-pink blooms, is especially useful for small spaces and containers. 'Tommy Knockers' is a seedling selected from 'Pink Elf'. It has peach flowers that hang in looser clusters than its parent's, grow slightly larger, and bloom longer.

Cape fuchsia is hardy to USDA Zone 7, which means it survives temperatures down to 0°F. It stays evergreen down to 20°F. The plant is happiest and will bloom most abundantly in full sun in well-draining soils and with regular watering during the dry season. I've grown it in partial shade and it has bloomed well enough there, although it does get a bit leggy reaching for the light.

Where winters are harsh, it's best not to cut back the previous year's growth until midspring, as the old stems offer some protection from cold. When the garden warms up, you may cut the plant back by about half to encourage new stems to break, or further back if you prefer. For extra shelter in cold regions, tuck cape fuchsias close to a south-facing wall where they can benefit from the extra warmth. Mulching the ground around the plant with finished compost will also help protect the root system from extreme cold.

For a more attractive plant, cut off spent flowers to let the new blossoms shine. Cape fuchsias spread by running suckers—in a small space, remove these from the plant to keep it from dominating.

The easiest way to propagate cape fuchsia is to dig up its running suckers and replant them in fertile soil. Marilyn Dube of Natural Designs Nursery in Portland, Oregon, recommends taking tip cuttings in midsummer and placing them in pots filled with a mixture of half vermiculite and half perlite. Set them in the shade and keep them watered, she says, and they'll root down very quickly. Cuttings taken in the fall need bottom heat set to 70°F.

You can also collect seed from cape fuchsias, just as you would from foxgloves. When the seed capsules are brown, crack them open and shake the seeds into a paper bag. Set the bag somewhere warm to make sure the seeds dry completely, then move it to a cool dry place for storage. Sow seeds outdoors in spring, or start them earlier inside if you have a greenhouse.

One of the most striking combinations in my garden was created accidentally when I planted P. 'Winchester Fanfare' in an island bed one fall day, completely oblivious of a neighboring calla lily (Zantedeschia aethiopica) that was going dormant. The next spring the calla and cape fuchsia formed a gorgeous garden bouquet&151;the calla's white trumpets unfurled in arresting contrast to the abundant smaller coral funnels of 'Winchester Fanfare.' The duet was riveting.

For midsummer, I love butter-yellow Coreopsis verticillata 'Moonbeam' or mustard-yellow C. verticillata 'Zagreb', both with circular flowers and threadlike leaves, combined with red Phygelius 'Devil's Tears'. Yellow 'Moonshine' yarrow (Achillea) or most any yellow daylily (Hemerocallis)—'Hyperion', 'Frank Hunter', 'So Sweet'— equally flattering in combination with 'Devil's Tears' or 'African Queen'. For a delightful color echo, try Hemerocallis 'Corky', a yellow daylily with red tints on the back of the petals, with 'Devil's Tears'.

Pink cape fuchsias are heavenly when paired with wine-leafed coral bells such as Heuchera 'Plum Pudding' or the darker H. 'Chocolate Ruffles'. The small burgundy flowers of the Macedonian pincushion flower (Knautia macedonica) make a flattering cloud near Phygelius 'Pink Sensation.' Any of the blue-violet perennials that bloom in midsummer are good companions for 'Trewidden Pink' and 'Pink Elf', especially Frikart's aster (Aster x frikartii) and Russian sage (Perovskia atriciplifolia). Gray-leafed plants are also flattering to the pink cultivars. For a shrubby backdrop companion, try Senecio greyii or Phlomis fruticosa, both of which have felted gray foliage. Silver, lacy forms of wormwood such as Artemesia 'Huntington' and Artemesia absinthium 'Lambrook Silver' also provide a refreshing contrast.

For a client who recently asked me to design a low-maintenance border, I combined cape fuchsias with a mixture of evergreen and deciduous shrubs for year-round interest and a red and yellow color scheme. I planted three red 'Devil's Tears' in front of 'Sundance' Mexican orange (Choisya ternata 'Sundance'), which has glowing golden evergreen leaves. I chose golden silverberry (Elaeagnus pungens 'Maculata'), also evergreen with leathery gold-and-green variegated leaves, as a backdrop for several yellow 'Moonraker' cape fuchsias.

For a quiet contrast with the two brilliant shrubs, I then added 'Aztec Pearl' Mexican orange, which has elegantly divided green leaves, and underplanted it with a handful of 'African Queen' cape fuchsias. I used two wine-leafed deciduous shrubs, 'Guincho Purple' elderberry (Sambucus nigra 'Guincho Purple') and 'Diabolo' ninebark (Physocarpus opulifolius 'Diabolo') as foils for the coral Phygelius 'Winchester Fanfare' and apricot P. 'Salmon Leap'. Just for fun, I threaded yellow-flowering Clematis 'Bill Mackenzie' through the purple elderberry and Clematis tangutica through the purple ninebark.

Barbara Blossom Ashmun writes a regular gardening column for Oregon's Portland Tribune. Her latest book is Married to My Garden, a collection of humorous and philosophical stories.