Dazzling Borders for Sun and Shade

The art and practice of creating dynamic, colorful, four-season borders planted with a mixture of perennials, shrubs, ornamental grasses, annuals, and bulbs has come of age in America. I credit much of this development to the perennial-plants craze that has swept the country over the past two decades. Every year, choice sun- and shade-loving perennials are being introduced, and other groups of plants have been propelled into the limelight along with them. Plant hunters and breeders continue to expand and diversify the palette of exceptional flowering and foliage shrubs, grasses, and long-blooming annuals. Many are brand-new hybrids and cultivars; others are time-tested plants riding new waves of popularity. Never before has there been such a wealth and diversity of ornamental plants to combine in mixed borders. 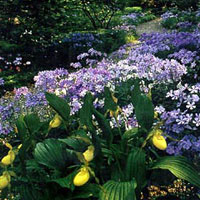 Under a canopy of large trees and shrubs, lady slipper orchids and blue phlox put on a spring show in a northeastern woodland border. (Photo: New England Wild Flower Society)

Mixed borders have a more natural look than strictly homogeneous herbaceous borders. The well-designed mixed border is layered with plantings of ephemeral bulbs, grasses, ferns, and long-blooming annuals with perennials and shrubs the way nature does in the wild. Spring-blooming bulbs provide early-season color and are great companions with shrubs; then they leave the scene for other plants to shine. Annual flowers can fill gaps, offer quick color fixes, and play with the big guys—those glamorous perennials! Summer bulbs, tropicals, accent plants in pots, and even garden art add still more levels of interest.

A well-planned herbaceous perennial border offers interesting foliage, flowers, and seed heads for a long season. But a crucial design element is missing—permanency. Herbaceous borders lack woody evergreen or deciduous small trees and shrubs to contribute form, mass, texture, and color throughout the year—particularly winter. Conversely, mixed borders are melting pots for great plants of all kinds, generating excitement and exuberance year-round. They are also biologically diverse and create habitat niches for a variety of wildlife.

Don't get me wrong—American gardeners' love affair with perennials is still passionate. But not everyone wants to plant and maintain a "pure" perennial border, particularly in the grand English tradition, with its regimented masses of herbaceous plants in carefully orchestrated color sweeps and repeating patterns. We have long attempted to replicate this flower-heavy herbaceous-border style in North America using the same plants that thrive in England, and we've learned that it is not an easy task. Climate types and growing conditions in most regions of North America are very different from those of the British Isles. In many areas, summers are much hotter and more humid and the winters colder; other regions experience periodic drought or cycles of wet and dry weather.

North American gardeners are increasingly discovering and defining new mixed border styles based on regional climate and growing conditions. We are also becoming more ecologically aware, learning that not all plants grow well everywhere, and that while garden styles may reflect personal taste and choice, they are not always environmentally appropriate for all regions. 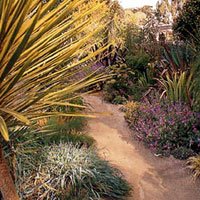 The flowers are a nice touch, but it's the distinctive textures and forms that make this California garden shine. (Photo: Saxon Holt)

Mixed borders here in North America have evolved from a cross between the English flower border and shrubbery planted to ring and anchor the suburban house. Evergreen and deciduous foundation shrubs, long-lived and offering reliable green substance and seasonal flowers, have long been accessorized with spots and splashes of perennials, annuals, and bulbs. But these compositions remained rather uninspired and predictable until the team of James van Sweden and Wolfgang Oehme introduced us to a new landscape style during the 1980s. Their approach capitalized on the growing interest in perennial plants and incorporated bold sweeps and masses of perennials and ornamental grasses with shrubs and trees in a more naturalistic style. At about the same time, California-based Rosalind Creasy threw out the rulebook on vegetable gardening and challenged us to look at the ornamental attributes of edibles like vegetables, fruits, and herbs. She demonstrated that they didn't have to be grown behind a fence in a segregated patch but could beautifully integrate with shrub-and-flower-border designs.

European landscape designers, particularly from Germany and Holland, have also influenced contemporary mixed border design. Dutch nurserymen and garden designers Piet Oudolf and Henk Gerritsen are broadening our vision of the mixed border by creating ethereal and lyrical moods and eliciting emotional responses through the deft use of plants. Employing plants with distinctive texture and form, a more natural appearance, and a subtle color palette, they are promoting a new naturalism for mixed borders.

Whether you're creating a landscape in the grassland or woodland regions of the Midwest, East, or Northwest or are an arid-climate gardener in Southern California or New Mexico, these exciting new trends in mixed border design will help you create a garden that is beautiful, regionally appropriate, and easier to maintain than the typical herbaceous-only planting.

Bob Hyland is a former VP of Horticulture and Operations at Brooklyn Botanic Garden. He currently co-owns Loomis Creek Nursery in Hudson, New York, which specializes in out-of-the-ordinary perennials, tender perennials, and annuals.