Like a country kitchen, a four-square kitchen garden evokes thoughts of hearth, home, and abundance. It is a garden design based on a very simple layout that provides a rich, unpretentious display of color, form, and, quite literally, good taste. Refined through the centuries, the four-square has been an integral part of home life and, like a good kitchen, is a place where you can have beauty and eat it, too.

The history of the classic four-square garden goes back seven centuries, to the first English cottage gardens. The English cottage garden style was born not of abundance but in a society crippled by the Black Death of the 12th century. The plague so decimated the working peasantry that, to garner a work force for the landholding aristocracy, landlords offered land and cottages in exchange for crops. The gardens that sprouted up around these cottages became a hallmark of English culture for hundreds of years. They were planted in the traditional four-square layout.

Early cottage gardens were commonly divided into four rectangular plots by two intersecting paths—hence the term "four-square." This arrangement made it easier to cultivate crops such as grains, vegetables, herbs, berries, and fruits, and sometimes even to raise livestock. Flowers ultimately found their way into the gardens, becoming an essential part of the cottage garden style. Today's four-square gardens, typically smaller than their predecessors, may devote as much space to flowers as to salads. There is plenty of room for originality, so no two gardens need ever be alike. 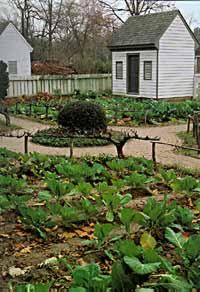 The four-square kitchen garden is based on a very simple layout that allows plenty of room for originality, rich color and form, and, quite literally, good taste.

A traditional English four-square garden is usually situated in the front yard, but modern yard arrangements make it both practical and appropriate to put the kitchen garden in the backyard. No matter where the garden is located, it should include four elements: an enclosure, an entry gateway, a T-shaped path system to delineate the planting beds, and a rich mixture of plantings.

To create a design for your garden, picture it as an outdoor room that first needs a good set of walls. A protective enclosure such as a masonry wall, fence, hedge, or closely planted trees creates this necessary boundary; the more solid the barrier, the more secure and cozy the interior of the garden will feel. Dry-laid stone walls usually make the most elegant enclosures, while wood fences are less labor intensive. A hedge is a reasonably priced alternative, but it may take time to grow to a mature size. One way to create additional interest is to vary your materials—you might build a brick wall for one side of the enclosure, and a hedge for another, for instance. Consider both aesthetics and surrounding structures when making your choices.

A gate not only gives the garden some form of entry, but it also helps to provide a signature style by hinting at the garden's mood within. Depending on the design and materials used, the gateway can suggest formality, informality, whimsy, even humor. Historically, simple white picket gates provided entry to a cottage garden. Today, arbors and trellises draped in flowering vines are popular and reinforce the message that this is a special place.

The traditional four-square layout is created by straight paths, one leading from the garden gate to the front entry of the house, and the other crossing it at a 90-degree angle. Absolute symmetry is not a requirement, so pathways can be offset to accommodate gates and doors. Depending on available space, the intersection of the two paths can also become a natural focal point. If you have enough room, consider carving out a circular area in which to place a sculpture, cistern, or other ornament.

The paths can be made of just about any material, from wood shavings to brick to stone to lawn. This flexible palette makes it possible to start conservatively—say, with gravel or compacted earth—and plan for future indulgences of stone or brick. Use materials that are appropriate for your region.

Plants for the four-square garden

Plants soften the linear austerity of a four-square garden. Think in terms of abundance, starting with the Border plants. Beds can be edged in shrubs, annuals, or perennials, depending on the size of the garden. If you have room for a hedge, choose a pleasing color and leaf texture since the hedge will be a backdrop for the other plants. Clipped English boxwoods (Buxus sempervirens) provide a traditional evergreen look. Other shrubs for hedges include photinia (Photinia fraseri), yews (Taxus species), hornbeams (Carpinus species), or some combination of these. Roses and pruned trees can also act as hedges in large gardens. For a more colorful look or a smaller garden, use low-growing flowers such as dwarf irises, daffodils, tulips, or lush lavenders to edge your beds.

Vegetables are the stars of the kitchen garden, and you can combine various vegetable colors and textures for innumerable design possibilities—plant kale in a diamond pattern and surround it with onions or radishes, for instance. Outside of the basic four-square structure, there are eally no rules to this type of garden.

Use herbs for edging, as fillers, or as accent plants. Plant creeping thyme along walkways, where it can spill out underfoot and release wonderful fragrance when stepped upon. Shrubby herbs like rosemary or sage create low, continuous class="border"rs if they are kept neatly trimmed.

Fruit trees are also essential for a complete kitchen garden. Of all the plants in the kitchen garden, they embrace the broadest range of seasons with displays of flowers, fruits, leaf color, and branch patterns. Plant fruit trees "orchard style" in one square, form a boundary planting, or even tumble them over a wall. Don't plant fruit trees throughout the garden, though, unless you can live with the resulting shade. If space is at a premium, espalier trees against a wall or a trellis or find dwarf varieties.

Vines are another feature in traditional four-square gardens. They give a garden a lived-in look, softening architecture and taking floral color to new heights. They are at their best twining around entryway arbors and gateposts, or clinging to walls and fences. Some good choices are Virginia creeper (Parthenocissus quinquefolia) and vine honeysuckles (Lonicera species)—but avoid Japanese honeysuckle (L. japonica), which is invasive. For color and edible fruit, choose from a wide variety of grapes, based on your climate. For color and fragrance, try wisteria (Wisteria floribunda) or climbing roses. Sweet peas and morning glories are fast-growing annual vines that can provide flowers quickly.

Finally, what is a kitchen without fresh cut flowers? Every kitchen garden must have them. Plant a corner of sunflowers to rise above the crowd, or tulips in a line to highlight a spring planting of lettuce. Or put a large planter in the center of the garden, and fill it with daffodils, cosmos, cornflowers, or whatever your heart desires. In a four-square garden, nearly anything goes.

If your house is contemporary, a traditional English-style cottage garden may not be appropriate, but it doesn't take much to give a four-square garden a modern look. Sculpture, for instance, can be very dramatic within the simple lines of the four-square. If the garden is large, try placing sculptural pieces in "hideaway" locations where they can be discovered. Be careful not to dominate the setting with overly large pieces, or you will destroy the inherent simplicity of the garden. Likewise, avoid curving pathways unless the garden is situated on a slope; there is a point at which the simple charm of the four-square can be lost to too many curves.

Since we tend to use our outdoor areas for entertainment more often than the 12th-century English peasants did, we should make space in the garden for this purpose. Leave all or part of one of the squares open for an outdoor terrace so you can enjoy the fruits of your labor while you watch them grow. The "floor" of this terrace can be anything from turf to gravel to stone pavers to brick. Or for a very contemporary feel, build a wood deck.

Modern four-squares are also tailored to their climates and regions, which can be both a challenge and a great opportunity. Use plants that reflect the regional color palette of plants, sky, and geology. Native dryland plants make a much more natural, appropriate kitchen garden in a desert climate than traditional cottage-garden plants. No matter where you live, a four-square kitchen garden will reward you with seasonal color, edibles, and an outdoor space that will feel like home.