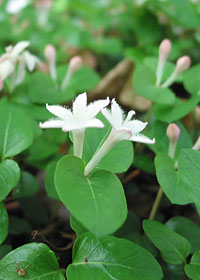 If you had to draw a picture of the northeastern deciduous forest, which plant species would you include? On its Nature of America stamp set released last year, the United States Postal Service whittled down the choices to 27 representative woodland flora and fauna. One surprising inclusion was the humble partridgeberry, a plant often underfoot and overlooked.

Surprising because partridgeberry, (Mitchella repens) is the quiet, unassuming type. It lacks height, flashy flowers, and multihued fall foliage. Despite its ubiquity in the woods, it is uncommon in the horticultural trade. This is a shame, since it has many characteristics to recommend it to a gardener. It is that rare beast—a native, shade-tolerant, broad-leaved evergreen groundcover. Seasonal eye candy includes white flowers in spring and red berries that persist through winter. I can't help but think that once the secret gets out, partridgeberry won't be absent from the home landscape for long.

In Its Natural State

In the wild, partridgeberry is a common component of the forest understory throughout eastern North America. It ranges from Newfoundland south to central Florida and from southern Ontario and Minnesota south to eastern Texas. The diminutive shrub inhabits the shady nooks of rich mixed-deciduous woods, preferring acidic soils. As an evergreen, it compensates for its low-light environment through its ability to photosynthesize during the entire winter season. From late spring to fall, the forest floor is cloaked in semidarkness, and mats of Mitchella repens lie prostrate, soaking up whatever sunlight penetrates the canopy above.

The creeping shrub hugs the ground, growing to only two inches in height. As the stems spread out, the branch and leaf nodes develop roots and anchor themselves into the soil. Eventually the slow-growing plant forms a dense carpet that may be several meters across. This scrambling cover spills down slopes and skirts the base of trees. By favoring such inclines, partridgeberry shrugs off fallen leaves that could otherwise smother it.

Unlike a paparazzi-crazed starlet, partridgeberry calls attention to itself infrequently throughout the year. It is most notable from late autumn through early spring, when its evergreen foliage contrasts with the grays and browns of the surrounding dead vegetation. These leathery leaves are small, about ½ inch across, are nearly round, and occur in pairs. The glossy deep green leaves are decoratively dissected by a white midrib.

As winter turns to spring and the growing season commences, partridgeberry recedes into the background. Maybe becoming indignant at the oversight, it garners some attention through the production of lightly fragrant white flowers in late spring (and often again in autumn). Less than an inch long, the tiny, tubular blooms are scattered along the stems in pairs.

Once the four petals retract, they expose the reproductive parts: a single pistil (female) and four stamens (male). The botanical lingo for partridgeberry's flowers is "distylous," since the neck of the pistil, or style, has two forms, or morphs—long-styled (pin) or short-styled (thrum). Each plant's flowers are all either one morph or the other. Distyly prevents self-fertilization and fertilization between like individuals, thus facilitating cross-pollination between pin and thrum morphs and, ultimately, genetic diversity within the species. Partridgeberry has another feature that promotes self-incompatibility: Only a few of its nectar-rich flowers are open at any given time, and this forces bumblebee pollinators to forage—and move pollen— between individual plants.

Interestingly, both flowers of the pair must be pollinated to produce a single viable fruit. After fertilization, the two flowers' ovaries fuse and mature into a solitary scarlet berry. This oval-shaped fruit is small—less than ½ inch across—and contains eight seeds. Each berry bears two "dimples," telltale depressions that mark where the two flowers joined. Ripe by late summer, the fruit may persist through the winter to provide a welcome jolt of color while other vegetation is hibernating. The absence of berries may be blamed on the eating habits of some animals. Several birds seem partial to the fruits, such as the ruffed grouse, sharp-tailed grouse, northern bobwhite, and prairie chicken, as does the red fox, raccoon, and white-tailed deer.

Despite the fact that the fruit production for fertilized flowers is high (over 86 percent), flowers and fruit are not abundant. While an individual plant may cover a large swath of ground, it will bear only a few blossoms and berries at a time.

The plant's generic name was a nod by Linnaeus to Dr. John Mitchell, an 18th-century Philadelphia botanist and physician. The specific epithet, repens, is derived from the Latin for "creeping." Our partridgeberry is the only species in the United States of the genus. Fellow cohorts of the Mitchella genus are few and mostly found in Asia.

Common names are abundant: By some counts there are over 30. Some of the monikers denote the plant as a food source for animals (partridgeberry, deerberry, running fox). Others refer to its unique methodology of fruit production (oneberry, two-eyed berry) and floral display (twinflower). "Squawberry" and "squaw vine" refer to the plant's use by Native Americans: A tea was given to pregnant women to prepare the body and uterus for childbirth.

The best advice for growing native plants in a garden environment is to mimic their natural habitat as much as possible. Most often there is some latitude with these requirements. For example, despite occurring in the wild in acidic soils, partridgeberry isn't fussy about pH in the garden. It can even thrive among limestone rocks.

One thing the plant is particular about is drainage: Soils should be moist but well drained. Once the plant's root system is well established, usually after two growing seasons, it will tolerate some drought. It prefers partial to full shade; too much sun will cause the plant stress. Despite its delicate appearance, partridgeberry can survive very cold winters and retain its deep, lustrous greenery. As its wide distribution would suggest, the plant thrives in USDA Hardiness Zones 3 to 8.

Mitchella repens transplants well and can easily be propagated by dividing the roots. You can also cut root-bearing sections of the stem around the nodes and pot them in moist soil. Just a few of these cuttings will create a nice-sized evergreen mat for the garden when transplanted out. To ensure successful fruiting, remember that you'll need flowers from both pin and thrum morphs; so gather cuttings from at least two distinct plants. There is not much information available regarding partridgeberry's propagation by seed.

As a landscaping element, partridgeberry is best used in woodland, shade, or border gardens; along paths or walkways; or in rock gardens. As a ground-layer evergreen, it brings a verdant hue to the garden all year and may be a good alternative for folks who find the solid wall of color presented by some taller evergreens overwhelming. Mixed in with deciduous herbaceous perennials, it can really shine in the winter.

An occasional trim will keep your partridgeberry looking tidy. In autumn, be sure to remove fallen leaves from the plant. Since it is not an aggressive grower, it is not appropriate for large sites. A better application would be covering blank spaces in shady spots. Due to its petite size, it also makes an excellent plant to try in a terrarium, grown in full sun and fairly organic, well-draining, medium-moist soil.

Mariellé Anzelone works to preserve the floristic diversity of the five boroughs through conservation and habitat management and restoration. Learn more at www.drosera-x.com.