Tomato Terms—or, What is an F1 Hybrid, Anyway?

Gardening by mail is nothing new in this country, though service has improved since 1631, the year John Winthrop, Jr. spent weeks waiting while his seeds traveled aboard the Lion from England to the Massachusetts Bay Colony. Winthrop's order, which cost him £ 160, was heavy on vegetables and herbs, not flowers. Onions, parsley, carrots, parsnips, radishes, pumpkins, squash and cabbages were requested in greatest quantities. Cauliflower seeds were the most costly item in his 59-item order, which did not include tomatoes.

Today, tomatoes head every most-popular vegetables list, and mail-order seeds arrive in days, not weeks—or, for instant gratification, you can grab packets off a rack at the local nursery and have them in the ground 30 minutes later. But that doesn't mean buying has gotten easier. Packets often carry more abbreviations than contents, making many of us wish that seeds still came in cloth bags labeled simply BEANS or PUMPKIN. One tomato I ordered this year came "sealed for freshness" in a 3 1/2-by-5-inch plastic-lined paper envelope bearing a color photograph of a seductive crimson fruit that could have only been produced in the Garden of Eden. The envelope reads: 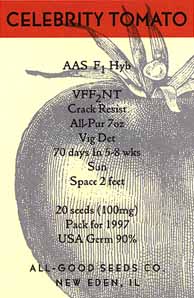 While it's tempting to ignore, even denounce this sort of horticultural shorthand, it's more useful to transcribe it. First off, the packet tells me that the cultivar of tomato I'm planting is 'Celebrity'. Plant cultivars, or varieties, are usually designated by single quotation marks. (There is a technical difference between a cultivar and a variety, the former a product of intentional breeding and the latter a result of accidental crossing, but the terms are often used interchangeably.) Plants also have genus and species names (the tomato's is Lycopersicon esculentum), which are indicated by italics or underlining. The packet also tells me that 'Celebrity' is an AAS, or All-America Selections winner. It won in 1984, after being tested in AAS trial gardens throughout the United States, grown and compared with other tomatoes of its type and judged outstanding by independent horticultural experts.

Tomato plants are self-pollinating when left to their own devices (and desires), but the designation F1 Hyb alerts me that 'Celebrity' is an intentional cross made between two distinct and stable, or "pure," tomatoes, using one as the male parent and the other as the female. Because 'Celebrity' is an F1, or first-generation, hybrid, it should have better-than-average vigor and give me earlier, more uniform and higher yields. But seeds from my 'Celebrity' tomatoes won't produce 'Celebrity' tomatoes. I can save seeds for planting, but I'm unlikely to recognize—or like—next year's harvest.

In contrast to a hybrid like 'Celebrity,' an OP (open-pollinate, or non-hybrid) is a variety like 'Brandywine', a superbly flavored tomato selected by 19th-century Amish farmers who named it after a Pennsylvania creek. Most OPs result when someone, usually a home gardener, finds an unusual or clearly superior tomato, saves its seeds and plants them the next year. Then the gardener saves the seeds of the best fruits of the best offspring and plants again. And again and again. In time—five generations or more—the characteristics valued, such as size, flavor or hardiness, are stabilized, and seeds will produce plants and fruits that are identical to their parent. (According to Tim Peters, an Oregon vegetable breeder and seed- company owner, about 70 percent of tomato seeds will come true after three generations.)

In addition to coming true, OPs tend to be "locally adapted," suited to a particular region. They may have adjusted to the environmental conditions where they were developed or have multi-resistance to common diseases of their locale. For example, 'Tappy's Finest', a pink-red OP, does well in moderate to cool conditions like those in the West Virginia mountains where it originated.

Both 'Brandywine' and 'Tappy's Finest' are also heirlooms, OP varieties developed before 1940. (The first hybrid tomato, 'Burpee Hybrid', was introduced by the W. Atlee Burpee Co. in 1945.) While all heirlooms are OPs, not all OPs are heirlooms, for home gardeners and commercial breeders continue to develop new non-hybrid tomatoes, such 'Oregon Spring', an early, cold-resistant variety released by Dr. James Baggett at Oregon State University in the 1980s.

VFF2NT tells me that 'Celebrity' plants are resistant—but not
immune—to verticillium wilt, two races of fusarium wilt, nematodes and tobacco mosaic virus. Disease resistance, which breeders have developed in many new tomatoes, is crucial to gardeners who till infected soil or to those who live in regions, such as the South, where heat and humidity combine to support tomato diseases more vigorously than high-school cheerleaders support football teams. If your garden is packed with viruses, fungus diseases and other plagues, the more letters the better. The most resistant tomato would be something like AAsAnBCfClmCsFF2GwLLbNNhrRknStSunTV (indicating at least some protection against Alternaria or early blight, alternaria stem canker, anthracnose, blossom end rot, catfacing, cladosporium leaf mold, crease stem, fusarium wilt race 1, fusarium wilt race 2, gray wall, septoria leafspot, late blight, root knot nematode, nail head rust, Stemphylium or gray leafspot, sunscald, tobacco mosaic virus and verticillum wilt). And it probably would taste like gauze.

'Celebrity' tomatoes resist cracking (Crack Resist), a problem where rain falls unevenly and the soil's moisture flits from dry to soppy, or where rainfall is excessive. It is an all-purpose (All Pur) tomato—good for slicing on BLTs and into salads, making soup and canning—and a medium-sized variety, with fruits averaging seven ounces (7 oz).

There are many ways to sort tomatoes, including plant size, fruit color (red, orange, pink, yellow, bi-color, other), maturity date (early-, mid-, late-season), use (all-purpose, salad, slicing, canning, paste/sauce, juice, stuffing), commercial or home varieties, hybrid or OP, but the most common method combines size, shape and use. From large to small, the usual classes are: beefsteak and/or very large, medium or standard, paste (plum and pear) and cherry.

'Celebrity' is a determinate (Det) tomato, the distant relative of a sport, or atypical plant, discovered in Florida in 1914. Compact and only moderately tall, determinates are bred to have a finite size. Once a determinate reaches its genetically programmed height, its stems produce terminal flower clusters that halt further stem growth. Like other determinates, fruits from 'Celebrity' ripen in a concentrated period, usually six weeks or less.

The tomato's wild progenitor is a viney plant that sprawls indefinitely. Anyone who has grown a vigorous indeterminate tomato like 'Sweet 100' can see firsthand the tomato's heritage (indeed, the world's record for "overall size" of a tomato plant is held by a cherry variety measuring 28 feet tall and 53 feet 6 inches wide). Indeterminate, in contrast to determinate, varieties continue to grow until they are halted by frost, and they produce earlier and more—and some argue better-tasting—fruits than determinates do. As long as the conditions are hospitable, indeterminate varieties will continue to set fruit.

Many determinates require no support, but 'Celebrity' is a semi- or vigorous determinate (Vig Det), growing to 4 feet or so, and may need help to stay upright. In addition to vigorous determinates, there are dwarf determinates, such as 'Dwarf Champion' and 'Patio', which are small enough to grow in a 12-inch pot, and miniature determinates—'Minibel' is one example—which have tiny fruits, short stems and are most often grown in containers as ornamentals.

'Celebrity' is a mid-season variety—I should have ripe tomatoes 70 days after the plants, which must be started indoors five to eight weeks (In 5-8 wks) before the frost-free date, are set in outside. If your season is long enough to sow tomato seeds directly in the garden, don't forget to add about six weeks to the days-to-maturity figure that appears on the packet as you calculate when you'll be picking your first tomato. 'Celebrity' plants should be located in full Sun and spaced 2 feet apart (Space 2 feet). Large, indeterminate varieties, such as 'Sweet 100', may need as much as 4 feet between plants.

My packet contains 20 seeds, which weigh 100 milligrams (100 mg), or about 3/1000 of an ounce. If that doesn't sound like much, remember that one ounce of tomato seeds will produce about 9,000 plants. Barring disaster, six plants of a standard variety like 'Celebrity' should produce enough fruit for a family of four. If you want to can tomatoes or freeze sauce, double the number of plants.

The seeds in this packet were grown domestically (USA) and packaged for the 1997 garden season (Pack for 1997). Most seeds packed for 1997 were grown in 1995, though they may have been grown even earlier. Fresh seeds are always a gardener's best choice, but don't throw away leftover seeds. Tomato seeds remain viable five years or more. If you're using old seeds, test, or proof, them before you plant. Place a dozen seeds between damp but not soppy white paper towels. If six sprout, the germination rate is 50 percent, and you should buy new seeds; if the rate is between 65 percent and 85 percent, use the seeds but sow more thickly than usual. With Germ 90 percent listed on this packet, I can expect 18 of my 20 'Celebrity' seeds to sprout.

It's a headful of information, but my 'Celebrity' packet still doesn't tell how deeply I should sow or the ideal temperature for germination. How many days to germination? When do I transplant? What kind of soil, what pH, how much water and fertilizer? Will 'Celebrity' succeed in my region? Were the seeds treated with a fungicide; were they grown organically? What is the yield per plant?

No seed packet tells it all, nor does it have to. By law, a vegetable-seed packet need only include the species and variety names and net weight on its front side. Many states also require a packed-for-season declaration, the name and address of the packager and the country of origin if it is other than the United States.

But more tomato terminology is better than less. The envelopes to be avoided are the vaguely ones marked: Easy to Grow Anywhere.

Giant Red Tomato is not easy to grow anywhere. Trust me.

Eat Local: How to Use Edible Flowers ›