Celebrate the Holidays at Lightscape - Tickets On Sale Now

Two critically endangered plants are poised to make the greatest comebacks in botanical history, thanks to a new conservation strategy based on encouraging gardeners around the globe to grow them.

For years zoologists have enlisted the help of animal lovers in saving imperiled species like orangutans with "Adopt an Acre" campaigns aimed at protecting their disappearing habitats. Plant lovers can not only help fund habitat protection but also play a very personal role in conservation. It's tough for most people to keep a pet orangutan or hippopotamus at home, but it is possible to grow a threatened plant and in the process help save it from extinction.

A campaign to commercialize the Wollemi pine, Wollemia nobilis, dreamed up by a coalition of Australian conservation biologists, is one of the first attempts to propagate and sell a plant worldwide in order to save it. The quirky conifer was discovered by chance only eleven years ago when a bushwalker, David Noble, stumbled across it in a remote rainforest gorge just 120 miles west of Sydney. An Australian national parks officer who was hiking with friends, Noble (for whom the species is named) noticed the unusual tree and took a small fallen branch home for identification. A team of excited botanists soon deemed the specimen a survivor of the Jurassic period, more than 200 million years ago, known from fossils but presumed to be extinct for 2,000 millennia. They declared the plant the botanical find of the 20th century—kind of like discovering a dinosaur alive and kicking. 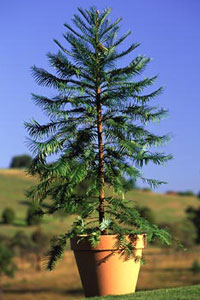 When the Wollemi pine was discovered in 1994, it was like finding a dinosaur alive and kicking. Photo courtesy Jaime Plaza, Botanic Gardens Trust.

The Wollemi pine is considered the only member of Wollemia, now the third living genus in the araucaria family (Araucariaceae). This ancient group of distinctive-looking conifers also includes such botanical survivors as the popular Norfolk Island pine (Araucaria heterophylla) and monkey puzzle tree (Araucaria araucana). Paleobotanists believe that Wollemi pines ruled the Southern Hemisphere when Australia was part of the ancient supercontinent Gondwana. Dinosaurs probably dined on their leaves. Fewer than 100 of the trees survive in the wild today. Not surprisingly, the Wollemi pine's astonishing story, ancient pedigree, and great looks have made it one of the most coveted plants on the planet.

Not every endangered plant is suitable for the horticulture trade, and commercial production can have adverse effects on the gene pool of a critically threatened plant. However, in the case of the Wollemi pine, the benefits outweigh the disadvantages. The decision to commercialize the conifer was prompted by the fact that small populations of other endangered plants have been wiped out by unscrupulous collectors. For example, wild populations of the foxtail palm (Wodyetia bifurcata), a Queensland native, were ravaged by an international black market for the plants. To protect the Wollemi pine from damage by the curious and the greedy, the exact location of its native habitat is a closely guarded secret—even the select few scientists who are allowed to visit the plant in the wild are blindfolded en route. The hope is that commercialization will head off a black market that could easily push the species to extinction.

The striking conifer has distinctive bubbled, milk-chocolate-brown bark, as well as unusual dark green, pendulous foliage that sets off the light-apple-green new growth. Perhaps its most idiosyncratic feature is the arrangement of the needled foliage, which is lined up in two ranks on both sides of the branches. It reaches a height of more than 130 feet in its native habitat, with a four-foot-diameter trunk.

Cultivation trials in Australia suggest that the Wollemi pine is hardy to at least 23°F, and it's suspected that a species that has weathered ice ages over many eons can probably withstand even colder temperatures. It prefers acid soils, and plants propagated from seeds and cuttings taken from the wild and grown in bright light have averaged more than a foot and a half in height a year. According to Barbara McGeoch of Wollemi Australia, a joint commercial venture of the Queensland government, the Botanic Gardens Trust (Sydney), and the Birkdale Nursery, the Wollemi pine is also very versatile. It makes a fabulous indoor and patio plant because it doesn't become root-bound and does better in low light situations than other araucarias.

Right now, trialing is also under way at a number of botanic gardens worldwide, including North America, to determine just how hardy the plant really is. It will soon be available to gardeners in the U.S., Australia, Japan, and Europe. To apply to be among the first to grow it, fill out the form on the Wollemi pine's website, www.wollemipine.com.

Another critically endangered plant that gardeners can now get to know and grow is the 'olulu palm (Brighamia insignis), also known as cabbage-on-a-stick. Once quite common on several Hawaiian islands, the unusual-looking plant today is one of the planet's rarest species. As few as seven specimens survive in the wild, only on Kauai, on some of the world's steepest volcanic slopes, including the island's spectacularly rugged Napali coast. 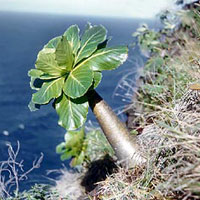 Cabbage-on-a-stick looks like an Aeonium on steroids. As few as seven plants survive in the wild. Photo courtesy H. St. John.

Unfortunately, the 'olulu palm is just one of many imperiled Hawaiian plants. The archipelago is home to a fascinating flora and fauna increasingly at risk. As many as 103 Hawaiian native plants may already be extinct, and at least 150 species have been reduced to fewer than 50 individuals in the wild. Overgrazing by feral goats is a serious problem for the 'olulu palm, as is competition from invasive nonnative vegetation. To make matters worse, the plant's sole pollinator, a long-tongued sphingid moth, has become exceedingly rare and may already be extinct.

In the pollinator's absence, the botanists working to save the species have become the flower fertilizers by default. Using climbing equipment to scale steep cliffs to reach the few survivors, or dangling off of helicopters on ropes, they've managed to hand-pollinate the blooms and collect seeds. Successful germination of the seeds has enabled scientists and horticulturists to create a reserve of plants to help cushion the 'olulu palm from imminent extinction. This propagated stock will be replanted in the species' natural habitat. What's more, working in partnership with the World Conservation Union (IUCN), Dutch nurseries have identified a variety suitable for commercial production in greenhouses, and the plants are now for sale to gardeners through horticultural outlets around the world.

The 'olulu palm looks like an Aeonium on steroids. Not a palm at all but rather a succulent in the bellflower family (Campanulaceae), it has an extraordinary rosette of spoon-shaped leaves atop a stout unbranched stem—hence the common name cabbage-on-a-stick. In the wild it can reach heights of 3 to 6 and occasionally even 15 feet. The leaves are shiny, leathery, and up to eight inches long. Each flower cluster consists of creamy-yellow, four-inch-long, trumpet-shaped flowers that have a honeysuckle-like perfume. The flowers emerge in wintertime.

The few lucky horticulturists at botanical research centers around the globe who have been able to grow the plant claim that it's very robust, but it does require some specific care. Put it in a reasonably sheltered location free of drafts where it will receive bright but indirect light. And remember that as a succulent it does not take kindly to overwatering. Place it in a rock garden, or grow it as a potted plant. For more information on the 'olulu palm and how to get it, see the plant's website, www.hawaiianpalm.nl.

You can feel doubly good about growing these plants: Royalties from the sale of both the Wollemi pine and the 'olulu palm will help fund conservation efforts.