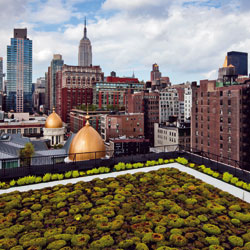 The view from the living roof of Cook + Fox, an architecture ﬁrm in Manhattan, shows that a growing number of urbanites are greening their rooftops.

Traditional black tar and asphalt roofs are affordable, watertight, and ubiquitous. They are also, unfortunately, extremely good at absorbing heat and repelling moisture. These attributes put them near the top of the list of contributors to both the urban heat island effect and the combined sewage overﬂow problems that plague cities around the world. By laying a mantle of earth and vegetation on a rooftop, a building owner can mitigate, in a small but measurable way, these ills. A green roof absorbs rainfall, lowers rooftop temperature, and offers other beneﬁts too. It extends roof life, earns points toward LEED (Leadership in Energy and Environmental Design) certiﬁcation, creates wildlife habitat, and garners good publicity. And for many people, installing one is simply the right thing to do. These beneﬁts will become even more important as temperatures and the volume of rainfall rise globally—as climate models predict they will.

The idea of insulating buildings with earth is not new. It has appeared in many incarnations around the world for thousands of years. What is new is the use of modern, lightweight materials to capture water and create conditions in which plants can thrive. Over the past several decades, European researchers have honed this technology, and Americans have brought the concept home. Chicago, Philadelphia, Seattle, and New York are among the cities actively using green roofs to help address water quality and infrastructure problems. Green Roofs for Healthy Cities, a North American industry association, reports that its members installed 4.3 million square feet of green roofs in 2010, twice the number of the year before.

The following pages explore the history of vegetated roofs, the structural engineering beneath them, and the plants best suited for them. Practical advice is included for readers who want to embark on their own projects. Also featured are proﬁles of an array of New York City green roofs, including a rooftop farm in Queens, a colorful retreat on a public housing development in the South Bronx, and BBG’s own water-capturing rooftop meadow. Most of these roofs are high up and out of sight for all save a small number of city dwellers, but as more and more are built, their beneﬁts will accrue and be felt by everyone.